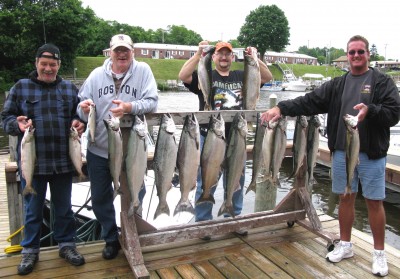 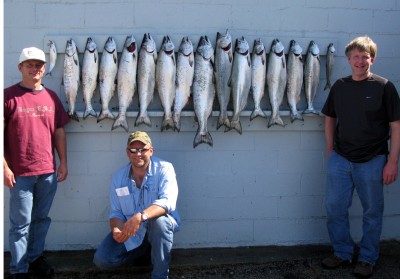 Fished up north again today. Set up in 100 feet of water and trolled north along the Bank.First thing we noticed was the strong current from the north. We were backed all the way down and had two bags in and were still doing 2.1 at the ball on our Fish Hawk. Our rigger were set at 70, 80, & 90 feet. Our big White Paddle/Pickled Sunshine Action Fly took our first King.  The 80 ft. rigger with a pair of Dreamweaver Super Breads went next. From then on most our fish came on our  wire  divers and coppers. We took quite a few Kings on 10″ Spin Doctor/Big Water Meat Rigs and Erie Dearie Herring Strips. A 10″ Blue Bubble/Blue Moo was good on a 350 copper. We will be fishing out of Manistee the next few days in preparation for the MCSFA Budweiser Pro / Am fishing tournament this weekend.