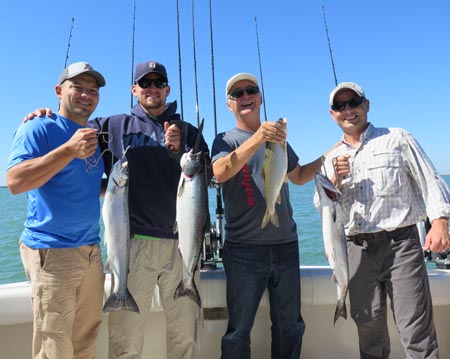 There were some pretty good waves coming from the west this morning as we headed southwest out of Ludington today. We set up in 140 feet of water. The temp break was down 100 feet. We took 2 Kings early. The first hit a regular Fuzzy Bear Yellowtail spoon stacked 10 ft. above the same spoon down 120 feet on the chute rigger. We just got that one in the boat when we hit another one on a 350 copper with a glow spoon. It was looking like we were going to have some good action, but those were our last bites for quite awhile. We trolled southwest out to the 36’s and turned back and trolled northeast to the 33’s. We took a Steelhead on our chute rigger with the Fuzzy Bear Yellowtails down 120. We missed a fish on a regular size Dreamweaver Lemon Ice 100 down on an out down and missed another fish on a 400 copper with a regular size Dreamweaver Blue Dolphin. Our last fish came when we were pulling lines. It was a Lake Trout that hit the out down set at 100 with the Lemon Ice. 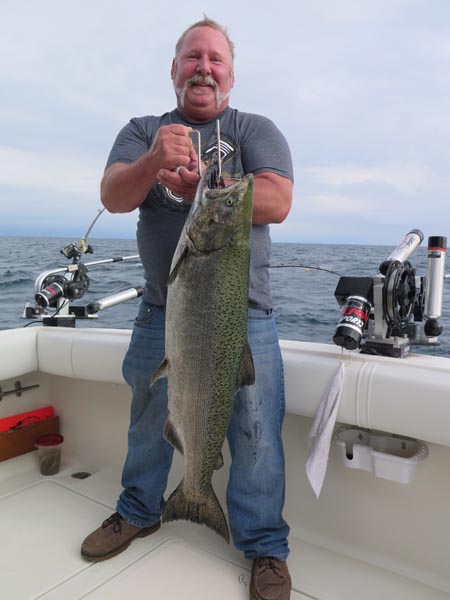 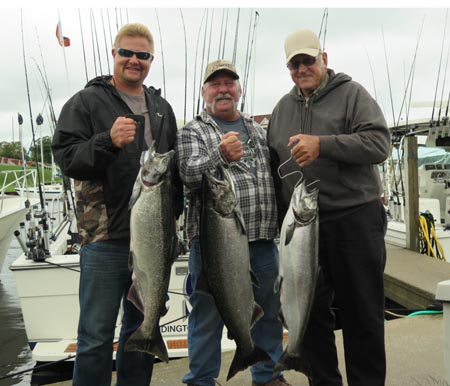 The Lake was fairly calm when we headed north this morning. Our crew was a little late getting to the boat but it was still early when we set lines. We missed our first 3 bites. We finally took a hard fighting King on a glow spoon 55 down on an out down. We had 2 other bites before we boated our 2nd King. It came on a 300 copper with an 8″ Blue Bubble Spin Doctor/Blue Bubble Action Fly. That combo went twice for us. Our biggest King weighed over 24 lbs. and came on a 350 copper with an 8″ White Slick Spin Doctor/Pickled Sunshine Action Fly. We had 2 meat bites and didn’t get either one. The first came on a 10″ Kevin’s Girlfriend Spin Doctor/Froggie Big Water Meat Rig on a out down set at 75 feet. The other came on a 10″ Showtime Spin Doctor/Blue UV Big Water Rig on a 375 copper. We had 9 bites total. Our crew did a good job on the rods, we just couldn’t keep them hooked. It looked like a good day for diver action, but we never had a diver bite. The wind picked up during the morning and the waves got pretty big. We pulled our lines a little early in very strong winds and pouring rain. The weather was good through most of the trip. We use Dreamweaver Premium Strips in all our meat rigs and Morgan’s copper on all our copper rods.