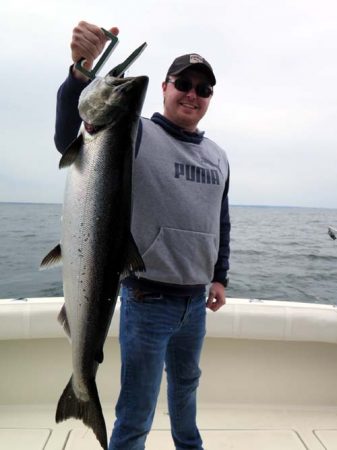 As the old saying goes “When in doubt go straight out”. We had plenty of doubt about going back north and we had no current reports from the south. So we went straight out of Ludington . We set up in the high 57’s in 80 feet of water and trolled west. We took our first fish in 85 ft. of water on a low wire diver out 85 with a 8″ Black Slick Spin Doctor/Pickled Sunshine Action Fly. It was a nice King. We took another King on a 7.5 color core with a regular DW UV Leopard. The only spoon to go twice was a Lemon Ice Super Slim on a 5 color core. The action wasn’t fast but we were communicating with other boats and nobody seemed to be having any better action. So we stayed in the 58’s working east and west from 75 to 110 feet of water. Our primary target was King Salmon. We were marking Trout on the bottom so we put a 8″ Chrome Spin Doctor/Blue Chrome WhirlyGig with Glow Wings on the chute rigger and sent it to the bottom. We took two of our three Trout on it. The third came on a 7.5 color core with a Yeck Wart Frog. We had a meat rig on a low wire but didn’t get any takers. We also took fish on a 10 color core, a 200 copper and on a rigger set at 50 ft. with a pair of glow spoons.