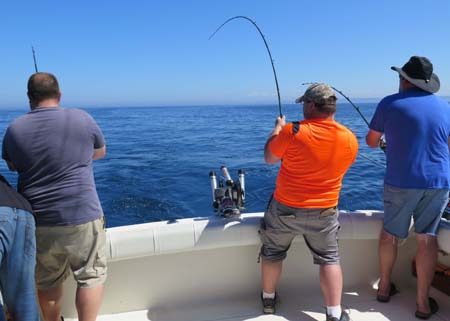 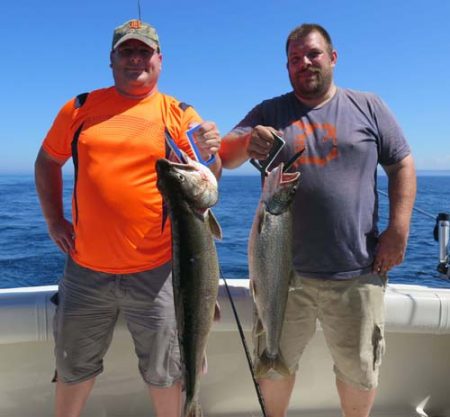 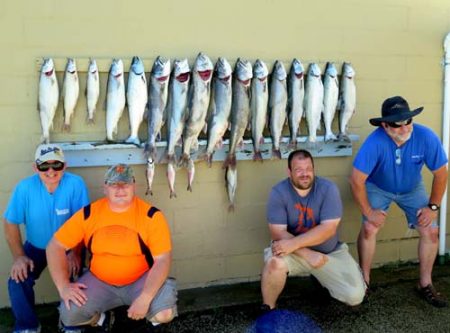 Had a fun day fishing south of Ludington today. We were all set up when a King hit a Super Slim Green Skinny Jeans free sliding above a DW Green Skinny Jeans 65 down on an out down. Got it right to the back of the boat and the hooks pulled loose. Reset it and it fired again. This time it was a shaker King. Got it in the net and it fell through the mesh and got away. Reset it and it went again. This time we landed a good size Lake Trout. It went one more time and we took about a 10 lb. King on it. We took another King the same size on a high wire diver out 185 with a 10″ White Slick Spin Doctor/Pickled Sunshine Dreamweaver Meat Rig.  Our 175 copper with a Super Slim Rasta Goose took a fierce hit and after a long fight we landed a nice Steelhead. After that it was mostly Lake Trout action. We caught some Dandy’s today. We had 2 hot rods. The chute rigger with an 8″ Lake Trout Candy Spin Doctor/Blue Chrome WhirlyGig with Glow Wings and a 8″ Chrome Spin Doctor with a prototype WhirlyGig on a low wire diver. We were bouncing bottom with the chute rigger a kept the low wire diver on or near the bottom. An 8″ Chrome Spin Doctor/Clown Spin-N-Glo was good on an out down too. The 8 inch Spin Doctors out fished the 10 inchers today.We worked between 100 & 110 feet of water most of the trip and moved out a little deeper later in the morning . We use Dreamweaver Premium Strips in all our meat rigs and pull our Morgan’s Tackle copper with Dreamweaver Ninja Boards. 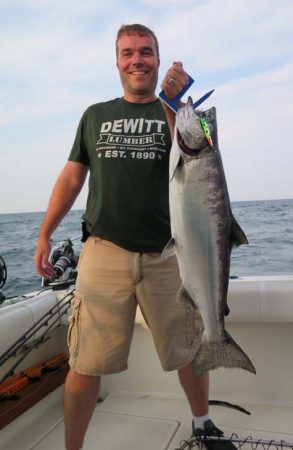 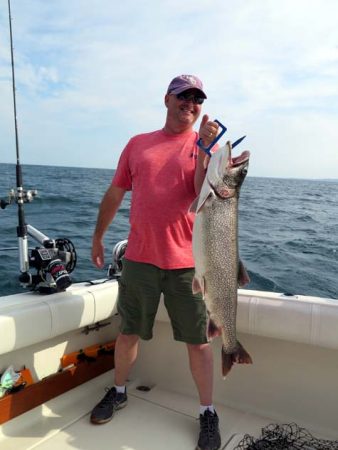 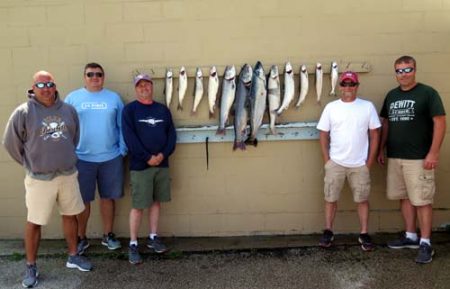 We fished south again today. The forecast was calling for 2 to 3 foot waves this morning. The waves were a lot closer to 2 feet than 3. We set up in 110 feet of water and trolled south southwest. We took a trout on or chute rigger and then hit a hard fighting King, pictured above, on a 175 copper with a Super Slim Rasta Goose. It took off on a run that threatened to spool us. We backed down our speed and another King hit a high wire diver out 170 with a 10″ White Slick Spin Doctor/Dreamweaver Pickled Sunshine Meat Rig. It ran out over 600 ft. of wire before it got off. Later in the trip we took a small King on a SS Carmel Dolphin on a 200 copper.  The big Trout pictured above took a 10″ Lake Trout Candy Spin Doctor/Blue Chrome WhirlyGig on the chute rigger bouncing bottom. We trolled mostly between 110 and 130 feet of water occasionally getting a little deeper. The waves got a little bigger near the end of the trip but it was a good day to be on the Lake. We use Dreamweaver Premium Strips in our meat rigs and pull Morgan’s Tackle Copper with DW Ninja Boards.