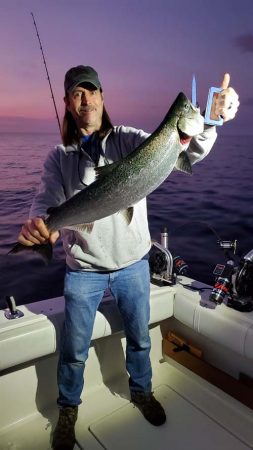 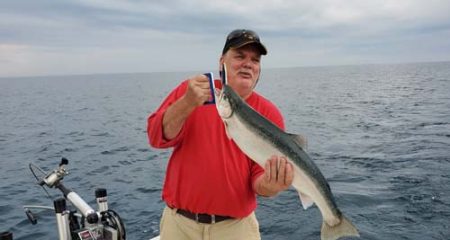 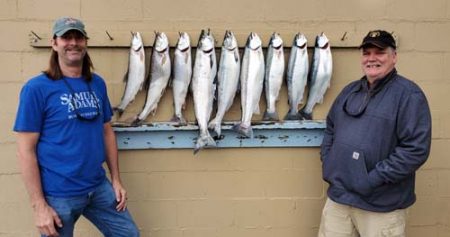 We ran a five hour trip today setting up southwest of Ludington in 210 ft. of water. The Lake was calm and we put it on a 280 troll. We took our first fish, a King, in the dark on a glow spoon down 65 on an out down. We landed it and then a low wire out 110 with a DW EVM spoon went and we landed another King. After that we just picked away. We took a Laker on a high wire out 200 with a mag Fuzzy Bear Green Skinny Jeans and another one on a 175 copper with a Copper Yeck Jared. We took a Steelhead on the 175 a little later in the trip. We turned back east when we hit 400 feet of water. The action on the in troll was about the same as the out troll. We took 2 Steelhead and a Laker on a 7.5 color core with a Yeck Fireball and missed 2 fish on a 10 color core with the same bait. Our chute rigger down 90 took a Steelhead on a DW Spotted Blue Dolphin. It was a fun trip and we made it in before the storm hit. This might have been my last trip of the season. I have Friday afternoon and Saturday morning booked but he weather forecast doesn’t look good either day. We pull our lead core and Morgan’s Tackle copper with Dreamweaver Ninja Boards. 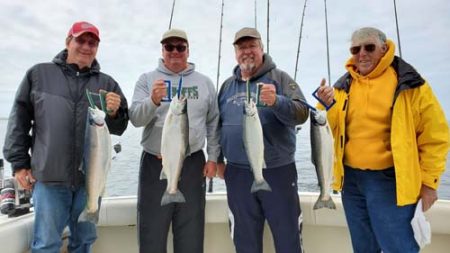