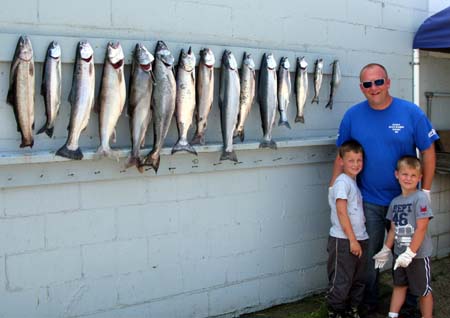 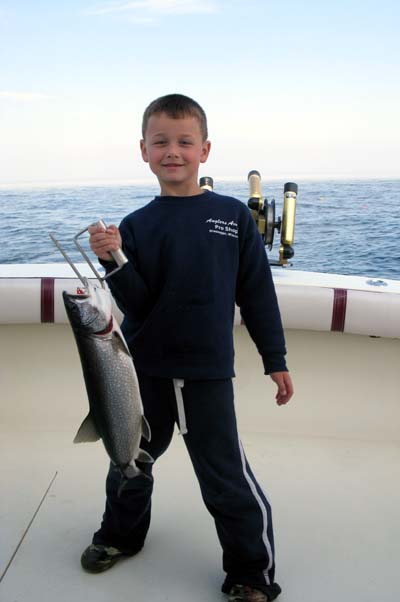 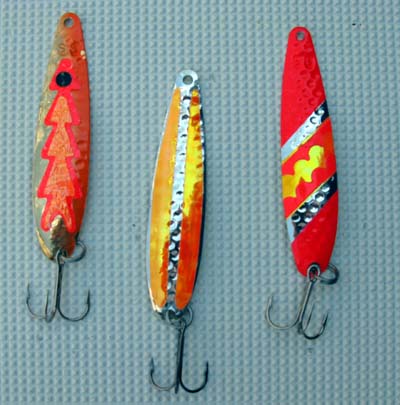 No charter today so I took the opportunity to fish with Capt. Shane and his two sons, Will and Landon, on the Dreamweaver. He wanted to make sure the boys got into some fish so we headed out to the temperature break northwest of Ludington. We set up north of the Point in 56 degree water and trolled wnw. We could see some fog in the distance and figured the big break was there, it was. The surface temp dropped from 56 degrees to 38.8 degrees in very short order . Our first bite was on a rigger set at 26 feet. After that all the action was on our Slide Divers and 1, 2, 3, & 5, color cores. We caught a mixed bag of Steelhead, Kings, & Lake Trout. All our fish came on Super Slim spoons. Our best were a Golden Orange Crush Icicle on a Slide diver with a 30′ lead out 90, and a Steelie Stomper out 85 with the same 30′ lead. We took several fish on a Double Orange Pearl on  3 & 5 color cores. Our best action was in the 48 to 43 degree water. When we finally called it quits were in 560 feet of water. The boys arms were sore but they were all smiles.