We fished north today on a half day trip. The wind was blowing from the southwest and it was pretty rough. We set up south of the bath house in 135 feet of water. The picture did not look good on our graph, no bait no fish. The temperature 70 feet down was 43 our Fish Hawk.  The last few trips we had fish on before we could get half our rods in, but not today. We had all our rods set before we hit our first fish. It came on the chute rigger down 65 with a mag Fuzzy Bear Yellowtail stacked with a standard Fuzzy Yellowtail. It took the stack and got off behind the boat. Our riggers were set at 45, 65, & 55. We had a pair of standard Dreamweaver UV Beefeaters on the out down set at 55. We marked a few fish 80 to 90 down so we lowered them down to 85 and they went right away with a decent King. Our 7.5 color core went with a Super Slim Spotted Magic Man but it got off. We took a fish on it later in the morning.  We dropped our other out down with a pair of standard Fuzzy Bear Yellowtails to 55 and took a small King on them. Our action picked up the further north we trolled. The waves were building and it was hard to boat our bites. The boat was surging with the waves. Our riggers went quite but our divers, coppers and cores were getting bites. Our best rod was a high wire standard Deeper Diver out 180 with an 8″ Kevin’s Girlfriend Spin Doctor/Pickled Sunshine Action Fly. It went at least 6 times. We only boated 2 of them. Our port low mag Deeper diver down 85 with a new 8″ Dreamweaver Flip Fin Paddle/Pickled Sunshine Action Fly went twice. A 10 color core with a Green Slice went twice. Our other 10 color went twice with a Super Slim Green Hulk . A Bloody Nose on a 7.5 color core went once. We took a big rip on a 225 copper with a mag Dreamweaver Green Dolphin. A standard Raspberry Carbon went once a high wire Deeper Diver out 95. We had our 10 fish at 8:15 plus 1 for the captain. We were 12 miles from home when we finished and it took over an hour heading into the waves to make it back to the Ludington pierheads. Our crew held up well and did a good job on the rods. We switched our lead core rods over to Stealth Core. It has only two colors, red & black. The black section is nearly invisible because it is neutral and the red section loses visibility, becoming neutral as it sinks in the water. We like the feel of this lead core line. We use Morgan’s Tackle copper and wire. 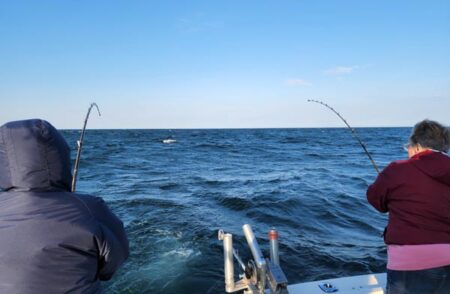 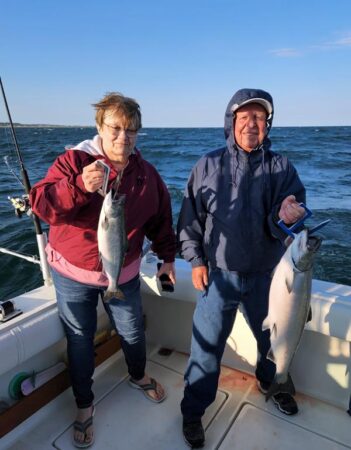 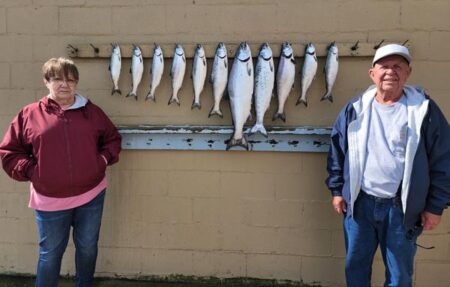