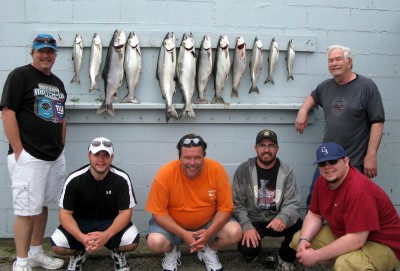 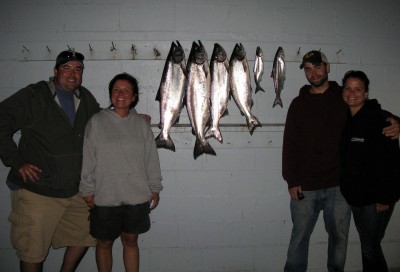 The strong wind from the southwest combined with the current from the north made fishing a little tough today. We fished a double and both crews held up well. We left the dock at 5:00 a.m. for the morning trip and headed up north setting up the middle of the 01’s in 100 feet of water. Lots of bait and fish on the graph. The down temp had warmed to 58 degrees. We hit a couple of small fish right away on our out downs on spoons. A big Black Paddle/Pickled Sunshine Action Fly on a low diver out 120 on a low wire diver diver took a shot but we missed him.  We took a couple more fish in the 100 to 110 ft range before we put it on a northwest troll and headed for deeper water. We just picked at the fish. The action was never hot.  We got out to 300 ft. before turning in the 06’s to make a southeast troll. We didn’t have a bite heading south until we hit the the Point. Our 11″ White Paddle/Pickled Sunshine Action Fly on the chute rigger down 120 took a big Lake Trout. The south troll was terrible. Big waves from the south west and the current from the north made very hard to get a good speed. Our divers were tightened way down and they were still tripping. When we turned back north at the Point we moved back in to 100 ft. and put down a couple of Trout rigs. The down temp was a little warm so we moved out to 125 ft. and the down temp was 50 degrees there . We hit three Trout and boated two of them. We didn’t have much action on our wire divers on this trip. We took a couple of  our bigger Kings on our coppers with meat rigs. A 350 copper with a 10″ Chrome Green Spin Doctor/Leprechaun Big Water Meat Rig went a couple of times and a 10″ Black Crush Spin Doctor/MooMoo Big Water Meat Rig on a 400 copper took our biggest fish. We are using  Erie Dearie Herring Strips on our meat rigs. Our best rigger rod was the pair of regular size Dreamweaver Super Bread spoons on a out down.
We left the dock at 4:00 on the afternoon trip and ran north to 01:00 and set up in 150 feet of water and trolled north. The wind had not let up and the waves were to 2 to 3 feet.  We rode for a while before we hit our first fish. It was on our 11″ White Paddle/Pickled Sunshine Action Fly down 120 feet. It was a big fish but the hook got turned and we lost him. We worked between 150 and 180 feet of water. There were lots of schools of suspended bait and some fish showing up on the graph but we didn’t hit another fish until we turned in toward the Point in 140 fow. That King came on a 10″ White Crush Spin Doctor/Big Red Big Water Meat Rig on a low wire diver out 160′.  We caught the rest of our fish working that 140 to 130 ft. band of water. Two of the other big Kings came on the 10″ Green Chrome Spin Doctors/Leprechaun Big Water Meat Rig, one on a high wire out 300′ and the other on a low wire out 150′. The biggest fish on our afternoon trip came on a 10″ Clear Blade Drak Green Tape Spin Doctor/Green Mile Big Water Meat Rig on a 400 copper. The two smaller Kings came on 300 coppers with spoons on them.