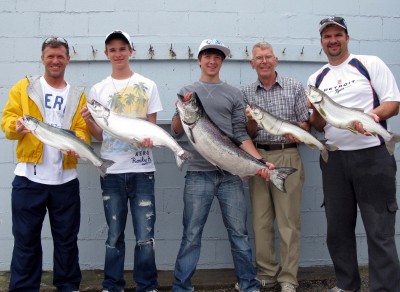 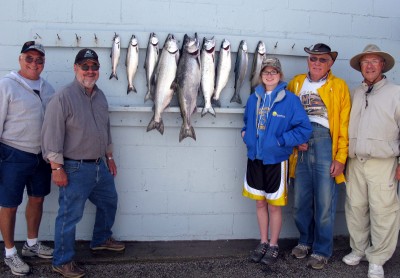 We fished staight out and a little south yesterday on the outside of the nets.  We set up in the 58’s and trolled south in the 36’s. Our two biggset Kings came on 10″ Spin Doctors and Big Water Meat Rigs ran on our wire divers. A Chrome Blue Spin Doctor/Blue Thunder Big Water Rig took the first one and the second took a Blue Bubble Spin Doctor/Cold Steel Big Water Rig. We fished out to the 39’s later in the morning, but the bite was slow for us. We fished up north today off the Bank and had good action. The north wind must have stirred them up. The first pass we hit several fish but the big waves from the north made landing them tough. After the first pass the action slowed so we worked out  deeper off the Point. The surface temp cooled the further west we trolled. We picked up a couple steelhead and a Laker out there. We couldn’t slow down enough to run our meat rigs. Most of our fish came on spoons. The biggest King came on an 11″ White Paddle/Pickled Sunshine Action Fly 80′ down on the chute rigger. A pair of regular size Fuzzy Bear Yellowtails were good on an out down. The Ludington Offshore Classic starts tomorrow with the Ruboy Thursday Shootout. We will be fishing in that event as well as the Ladies Classic on Friday and the Pro/Am on the weekend. I probably won’t have time to post any reports until Monday