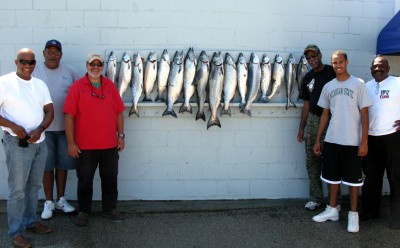 Had to reschedule yesterdays trip due the strong northwest winds. Lots of cold water around Ludington so we decided to back out deep to the stable water and try our luck. We went straight out and a little south again today setting up in the 40’s west. We ran pretty much the same program as Tuesday. We trolled between the 40’s & 46’s. Our out troll was our best.  We didn’t have any rod that was real hot. Just about everyone took at least one fish. We had a plug on a 10 color that went three times. The surface temp was 68 degrees and it was 57 down 50 feet. This was a little colder than Tuesday so we figured the fish would be about in the same area, maybe a little higher. There we a lot of fish in the top 65 feet, but there were a lot deeper too. Our deepest came 80 down on a Yeck Wart Frog. Our high wire diver with a 10″ Glow Blade Blue Bubble/Blue Moo didn’t go today so we replaced it  with a 10″ Blue Bubble SlickSpin Doctor/Cold Steel Big Water Rig and dropped it back to 185′ and then it started going. Our regular size Dreamweaver Beefeaters took some fish 50 down on an out down. We had a Casper Glow Blue Kingfisher/Blue Thunder Big Water Rig 65 down on the chute rigger that was steady. We also put a Blue Aurora Glow Kingfisher/Blue Thunder Big Water Rig  on a 300 copper and that went three times.  A regular Fuzzy Bear Modified Blue Dolphin on a 200 copper went twice. A DW Super Slim Chiznit on an 8 color core took some fish for us.  The boats that went north of the point on the bank did well too.