We set up on the bank this morning in the high 02’s in 90 FOW. We trolled north to the 04’s working between 80 & 100 feet and never had a bite. There were some boats hitting a few fish but not us. We slid off the bank and put it on a northwest troll. We started getting bites when we hit 180 feet. We were going to go to 300 feet and work it back in but we kept hitting fish so we kept going northwest. By the time we turned to make a south troll we were in the middle of the 08’s in 540 FOW. The action was very good. We hit a lot of Coho’s as well as some nice Kings 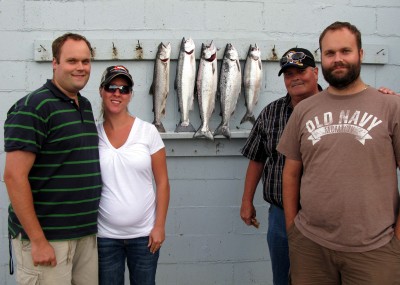 . We took a Steelhead & a Laker too. Our wire divers  with 10″ Spin Doctors and Big Water Meat Rigs were hot again today. The highs were out 125 & 130 and the lows were out 90 & 100.  We had the same rigs as yesterday on our wires. Our out downs were set at 45 & 50 ft. and the chute was set at 65. Lots of out down bites but we never took a fish on our chute rigger. We had a mag size Fuzzy Bear Frosted Veggie on the main and a regular Frosted Veggie on the slider on one out down and a pair of regular Dreamweaver Beefeaters on the other one. We had a regular Fuzzy Bear Frosted Veggie on a 12 color core that was good. A Blue Aurora Kingfisher/Blue Thunder Big Water Meat Rig on a 300 copper went 3 times.  We went back out there on the afternoon trip despite the big waves.  It was very rough. We took a couple fish on the upwind troll but it was a tough troll. We turned down wind in the high 05’s but the waves kept building and it became unfishable for us. We cut the trip short but managed to go 5 for 8.