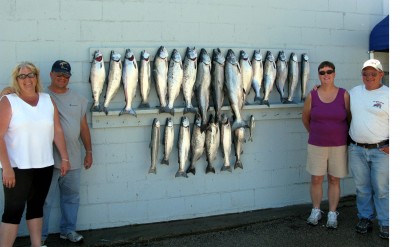 Very good fishing today. After the big blow from the north the last two days we ran straight out and a little south looking for warmer water. We stopped in the 45’s west. The surface temp was 62 degrees. We put the probe down expecting the break to be about 40 feet. Wrong, it was 47 degrees 70 down. We had over shot our mark.  We put it on an in troll and started fishing. We hit a few fish on the in but it was no big deal. We turned back west when we hit the 40 line.  Our out troll was very good. A pair of Fuzzy Bear Frozen Veggie’s on an out down set at 50 went several times. We had a mag on the main and a regular free sliding. A Blue Glow Casper Kingfisher/BlueMoo Big Water Meat Rig 65 down on the chute rigger took two of our biggest fish. Our high wire divers out 130 & 140 with the 10″ White Crush Mountain Dew/Cold Steel Big Water Meat Rig on one and a 10″ Glow Blade Blue Bubble Spin Doctor/Blue Moo Big Water Rig  were real steady. Our low wires took a couple of fish but wern’t near as good as the highs. We ran 7,8,10, color cores and 200, 250 & 300 coppers. They all took fish. Our best cores were our 10 colors. We had a Yeck Copperhead on one and a regular size Fuzzy Bear SOG on the other.  Our best coppers were the 200’s.  A regular size Fuzzy Bear Frozen Veggie on one and a regular Dreamweaver Beefeater on the other. A Blue Aurora Kingfisher/Blue Thunder Big water Meat Rig on a 300 copper took a couple of ni