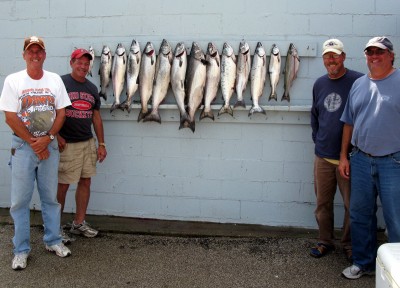 Good fishing continues in Ludington. Last night we went back out deep started in the 41’s and trolled west. The wind had picked up and it was very uncomfortable trying to maintain a 270 troll so we put it on a 300 heading.  The fish wanted the speed a little faster than they did in the morning.  As long as we maintained a 2.9 speed at the ball  on our Fish Hawk no matter which way were were going we got bites.  Our high wire divers with 10″ Spin Doctors and Big Water Meat Rigs out 150 & 145 were good.  The Mountain Dew/Cold Steel Rig was on one and a Blue Bubble Slick /Cold Steel on the other.  We were running the same cores and coppers as we did in the morning. This morning it was blowing out of the southwest and we thought it might be too rough out deep so we headed north to fish off the bank. It was  never red hot, but it was steady all morning.  Not much of an early bite.  The water was colder south of the stick. Our best action was north of the point in 100 to 150 FOW. Boats were hitting fish all the way to the 07’s. Our wire divers were out 125 & 130 early then 145 & 150 later in the morning.  The highs were the 10″ Mountain Dew/Cold Steel & Glow Blade Blue Bubble Spin Doctor/Blue Moo Big Water Rig and the lows out 95 & 105 were  A 10″ Show Time Spin Doctor/Moo Moo Meat Rig  and a Blue Casper Kingfisher Flasher/Blue Moo Meat Rig. The highs went several times and the lows twice each. Our hot rigger was a 10″ Glow Blade Spin Doctor/Froggie Big Water Rig down 65 feet early then 85 later in the morning. The out downs were 50 and 60 early and 56 & 95 later. The 95 ft. rigger with a pair of Dreamweaver Beefeaters was good. Several boats were hitting fish on 3 & 5 color cores with plugs & spoons but our highest core bite was an 8 color with a double glow plug on it.  A regular Fuzzy Bear Frozen Veggie on a 200 cooper was real good.