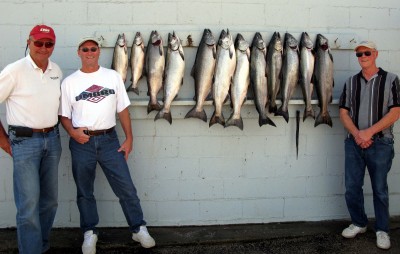 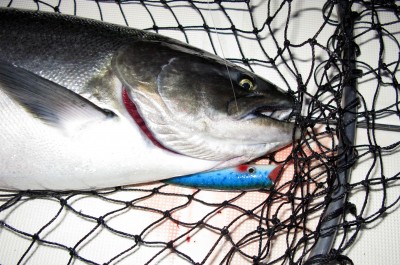 We fished up north on the bank again today. We set up in 100 FOW in the high 01’s. The water was colder today, 55 degrees down 50 feet. Same as the last few days, we hit a few early then picked away at them. We got some plug bites today. The Dreamweaver Captain’s Choice Glow Blue Splatter Back Plug  pictured below was good early on an 8 color core. After the sun came up we replaced with a CCP Mother of Pearl Black Dots and it took a rip but we didn’t get it. We missed more than we caught today. It wasn’t our crew’s fault. These fish just don’t want to die and are tough to keep hooked up. It was mostly a meat & plug bite for us. We were running the same rigs on our wires that we’ve been running the last week. The 10″ Glow Blade Blue Bubble/Blue Moo high diver bait on a high wire only went a couple times for us today but it was hot for some other boats. We didn’t make it any further north than the high 04’s today and stayed between 90 and 130 FOW. We took about the same number of hits on both the north & south troll.