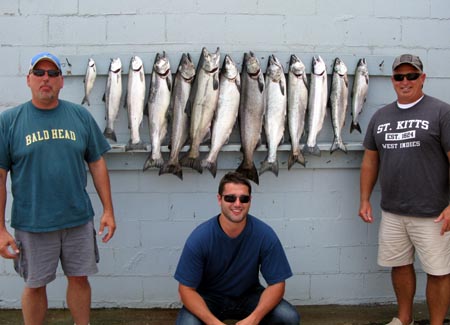 Boat traffic was heavy again today up north. We were setting our second rod when the chute rigger down 70 with an 11″ White Paddle/Pickled Sunshine Action Fly started bouncing with a good size King on it. We boated it and hit one on an out down set at 50 ft. with a Lucky Charms Captain’s Choice Cut Plug. The other out down fired with a Pearl Zebra Captain’s Choice Cut Plug and so did a 10 color core with a Wonder Bread Captains Choice Cut Plug. We took another King on a high wire diver out 150 with a 10″ White Slick Spin Doctor/Blue Fairways Strong Fly. That combo went two more times later in the morning out 270 on a high wire. After that flurry the action slowed considerably. We turned back south and only had one bite, a small Coho, on a 10 color core with a spoon. We turned and put it on a northwest troll heading for deeper water. We took a three Steelhead out there on spoons. Two came on a Dreamweaver SOG spoon on an out down 65 down and later 75 down. The other one took a Bloody Nose on a 10 color core. Our biggest King came on a 300 copper with a 10″ Chrome Killer Spin Doctor/Green Death Big Water Meat Rig.  We lost a King on a low wire diver out 170 with a 10″ Black Slick Spin Doctor/UV On Ice Big Water Rig and took one on a 300 copper with an 8″ Chrome Kevorkian Spin Doctor/Yellow Gasoline Dreamweaver Meat Rig. We use Dreamweaver Premium Strips in all our meat rigs and Morgan’s Tackle copper on all our copper rods.