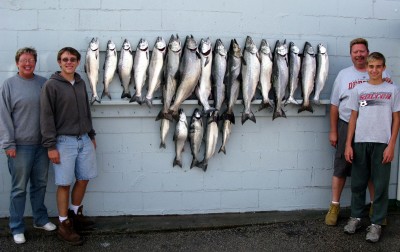 Fantastic fishing today! We went a little south and out deep today. Most of the boats were in the 51’s to 53’s so we set up north of that in the middle of the 41’s west.The surface temp was 72 and it was 62 down 50 feet. Our out downs were set at 40 & 55 and the chute rigger was down 65. We had a pair of Yeck Wart Frogs on one and a pair of regular Dreamweaver Beefeaters on the other. The chute rigger had a Casper Glow Kingfisher Flasher and a Blue Moo Big Water Meat Rig on it. Our wire divers were hot. Our highs were out 110 & 120 ft. and the lows were out 85 & 95 ft. Three of the divers had 10″ Spin Doctors/Big Water Meat Rigs on them and one had a 10″ White Crush Spin Doctor/Green Mirage Strong Fly on it. All our divers took fish but the ones with the meat were most productive. We our usual setups on them, White Crush Mountain Dew/Cold Steel, Glow Blade Blue Bubble/Blue Moo and Show Time/Moo Moo. Most of our Kings were taken the divers. Our cores were 7,8, & 10 colors and we had two 200 coppers out. They all had spoons on them and they all took at least one fish. We trolled out to the 48 line but our bites stopped in the 46’s. We made an in troll and finished up in the 42’s. Most of our Kings were taken in the 42’s & 43’s and the Coho & Steelhead in the 44’s to 46’s.