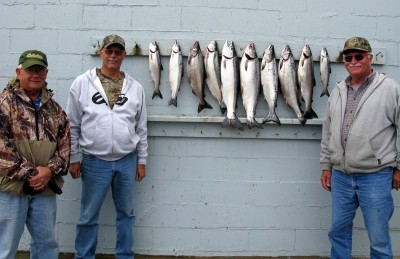 After yesterdays southwest wind we fished up north this morning. The forecast called for 2 to 4 foot waves out of the wnw so we ran up to the 06’s in 100 FOW and trolled south. The  coastwatch image said the surface temp was 56 but it was 51 and it was 50 down 60 feet. We hit 5 fish pretty quick landing 4 of them. The action slowed but we never went too long without a bite. The waves kept building and we all were questioning 4 foot wave forecast. By the end of the trip it was hard to stand up and fight a fish. We took fish between 90 & 145 FOW. Most of our fish came on spoons but our best rod was a low wire out 70ft. with a 10″ Glow Blade Blue Bubble Spin Doctor/Blue Moo Big Water Meat Rig – it went 4 times. A SS Magic Man on a 3 and 5 color core was good and a regular size Dreamweaver Green & Yellow Tip with Green Glow Tape Spoon set at 45 ft. was our best rigger.