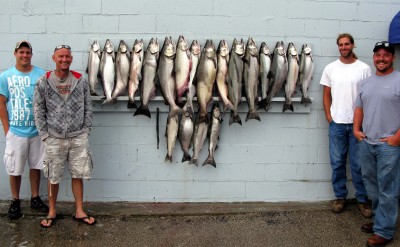 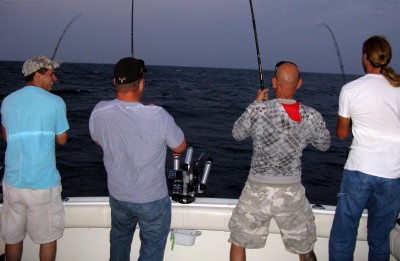 Good fishing today up north. The wind was blowing hard from the SE but the lake was not too bad. We set up in th01’s in 110 FOW. The water had warmed since the last time we fished.  It was 61 degrees at 60 feet. When we got north of the point the water got colder, 56 at 60 feet. Our outdowns were set at 60 & 65 and the chute was set at 75. We had a Dreamweaver Captain’s Choice Natural Glow Cut Plug on a 200 & 250 copper. Those were our first two rods to fire. We had Dreamweaver Beefeaters on our out downs, a pair of regulars on one and a mag with a free sliding regular on the other. Our chute rigger had a 10″ Glow Blade Spin Doctor/Green Mirage Strong Fly combo on it. Our high wires with a 10″ Glow Blade Blue Bubble Spin Doctor/Blue Moo Big Water Rig & a 10″ White Crush Mountain Dew Spin Doctor/Blue Fairways Strong Fly out 200 & 180 ft. were our hot rods. Our low wires were out 150 & 170 feet. They took fish but not like the high wires. We had a slow troll going north and had to bump it up on the south troll.  A little later in the morning the wind switched around to the SW and the Lake starting building. We took our 20th fish about 10 a.m. north of the point. We had a long slow ride home. The waves were big south of the point.