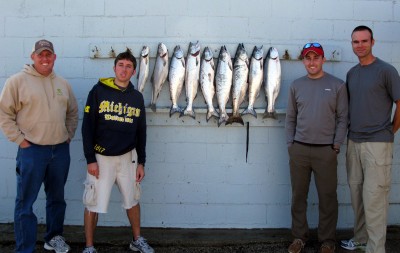 The group we had today wanted to fish offshore so we headed southwest looking for warm water. We found a break in about 200 FOW that went from 44 degrees to 54 degrees and set up there. We trolled east and west between 200 & 300 FOW.  It took a while before we hit our first fish. It hit a low wire with a 10″ Glow Blade Spin Doctor/Blue Moo out 70 feet. That was the only low wire bite we had. We were running Slide Divers for our highs and took 2 fish on those. A Dreamweaver SS Green Jeans on a 3 color core took our biggest fish. Our best rod was a 10″ White Crush Spin Doctor/Cold Steel Big Water Meat Rig on a 200 copper. It went three times. We also took fish on a big White Paddle/Pickled Sunshine Action Fly down 40 on the chute rigger and on a regular Fuzzy Bear Yellowtail down 35 on an out down. An SS Beefeater on a 10 color took a King too. Our action slowed the last hour or so. We usually get some Steelhead bites later in the morning, but not today.