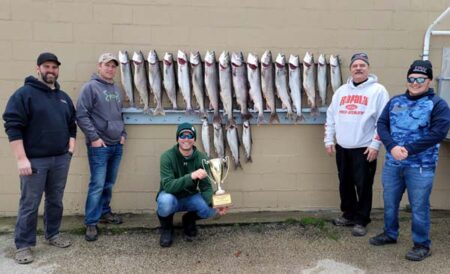 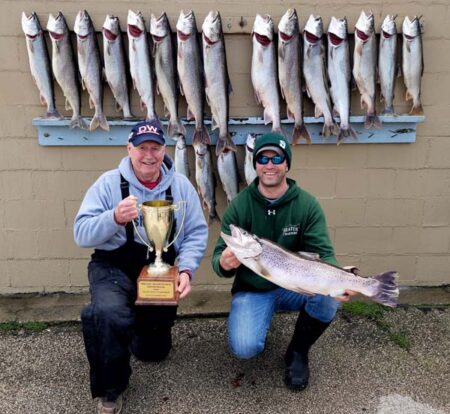 We fished the Brian McDonald Memorial Tournament today. It is a fun local tournament. The top prize is for the biggest Brown Trout.  We started out south of the Ludington harbor and trolled northwest along the south break wall. We went across the harbor mouth and turned east trolling outside the north break wall. About half way down we hit a fish on a free bird with a Clown Rapala Huskey Jerk. Captain Adam from Hiatus Charters was fishing with us. He grabbed the rod and immediately said it was a big fish. We slowed the boat and started pulling some lines to avoid them tangling with the fish. The fish jumped and we saw it was a big Brown. We pulled the rest of our lines and concentrated on getting this fish in. It put up quite a fight but finally ended up in our net. It weighed 13.3 lbs. and took 1st place for the Big Brown. We continued trolling north. We missed a fish, took a Cisco, and several small King Salmon. There was also a prize for the team with the  heaviest 5 fish. We pulled lines north of the Lincoln River and ran south to fish for Lake Trout. We fished between 55 and 70 feet of water. The Trout were biting. Our wire divers with 8″ Spin Doctors & WhirlyGigs took most of our fish. A friend fishing on Blue Fairways, Logan Wessendorf, has been having success using a 8 ” White Crush DW Paddle with a Green Glow Spin-N-Glo on a 10 color core. We rigged one up and took a nice Laker on it. We had a heavy box of fish but not heavy enough to cash. This was our first year fishing the event. It was a fun time and we hope to enter again next year.