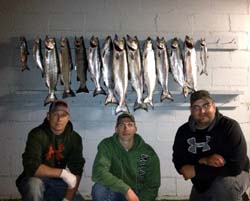 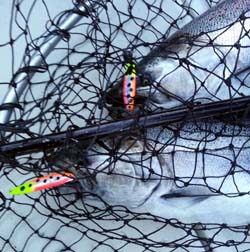 We had good fishing last night on our shakedown trip. Left the dock about 5:30 p.m. and headed north. We set up in 60 feet of water (fow) at the bath house and trolled north on a 340. We didn’t have all our lines set when a Slide Diver out 50 with a glow spoon started hammering. We missed that one. Just got the rod reset and the low wire out 45 with a regular size Fuzzy Bear Yellow Tail got hit hard. It was a big fish that took out a lot of wire, but he got away too. We were in 80 fow when the other Slide Diver turned to 4 out 55′ with a Dreamweaver SS Wrecking  Ball took a Steelhead. Our divers were good all night. Next rod to go was a 2 color core with a DW SS Silver with Red Tape. We took two fish on that, both small Kings. We fished out to 110 fow down to the Bares (05:50) and turned back north. The temp kept dropping the further north we trolled. It was 43 on the surface when we turned. The south troll was dead until we hit the 04’s. The action  picked up at the Point. The temp was 46 there. We had really good action in that warmer water. We had out 2, 3, 5 ,7,& 10 color cores. They all got hits. Our biggest King came on a 7 color core with a DW SS Sexy Veggie which is new for 2014. We only had one rigger bite. That was on an 8″ White Crush Spin Doctor/Pickled Sunshine Action Fly down 48 on the chute rigger. Our hottest bait was an Super Slim Wrecking Ball also new for this year. It had five bites. We had it on a 3 color core and on a Slide Diver. We took a double on Kings (pictured above right) with it. All in all it was a nice trip and it felt good to be back to catching Kings in Ludington.