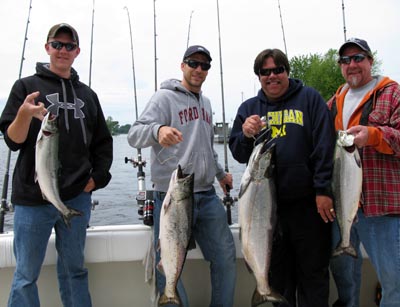 Tough fishing today. The water up north looked  too cold so we headed southwest out of Ludington harbor this morning. We stopped in 100 fow in the 55’s and started trolling west southwest. The surface temp was 51 degrees. It didn’t take too long for us to take our first fish. It was a King that hit a low wire diver out 85′ with a  10″ White Crush Spin Doctor/Froggie Big Water Meat Rig. Another King hit a 5 color core with a Super Slim Beefeater Spoon on it, but it got tangled our 200 copper and got away. The surface temperature started dropping and when we hit 130 fow it dropped to 41 degrees. We talked to a few other boats that were out deeper fishing on the other side of the cold water and they weren’t having any better action than we were so we opted to stay on the inside of the break and fish for Kings. It was slow going. We worked in and out between the 55’s & 54’s with no bites. The boats out deep on the outside were staring to pick up a few fish so we decided to make one more out troll to the edge of the cold water and if we didn’t hit any more fish we were going to pull lines and head west. Just before we  hit the cold water we took a double.  One on a high wire diver out 150  with a 10″ White Crush Spin Doctor/Moo Moo Big Water Meat Rig and one on a 200 copper with a Yeck Lighting Spoon. The King that took the meat rig weighed 20 lbs. and is pictured right. That clinched it for us. We were staying put and fishing the inside of the break for Kings. We fished two more hours and only took one more fish. That came on the chute rigger down 65 ft. with a 10″ Margareta Spin Doctor /Leuprocohn Big Water Rig. Hoping for better action tomorrow.