Wasn’t too sure what to expect this morning after having 3 days off. We heard a couple reports of boats hitting fish up north so we headed that way setting up in 110 feet of water south of the Point. It was raining but not too hard and we could see lighting south of us. We took a decent King on the 1st rod in. It was on a mag DW Hulk 80 down on the chute rigger. We took 3 fish on that bait, 2 Kings & a Laker. We took 2 nice Kings on a high wire diver out 145 with an 8″ Blue Bubble Spin Doctor/Blue Bubble Action Fly. We took a small King on an out down set a 45 with a pair of Yeck Wart Frogs. A good fish hit a pair of DW Green Skinny Jeans Super Slims but it came up into our low wire and got away. We missed another fish on a low wire diver out 85 with a Mag Green Glow. Our other small King came on a 5 color core with a Gold Mixed Veggie Super Slim. Our biggest fish of the day came on an 8″Chilly Willie Spin Doctor/Pickled Sunshine Action Fly, pictured above. Our last King came on a 300 copper with a glow spoon. All our fish came on a north troll between 100 & 130 feet of water. There appeared to be a big storm approaching from the west and we could see some lighting. We started pulling lines a little after 8 and were running in at 8:30. 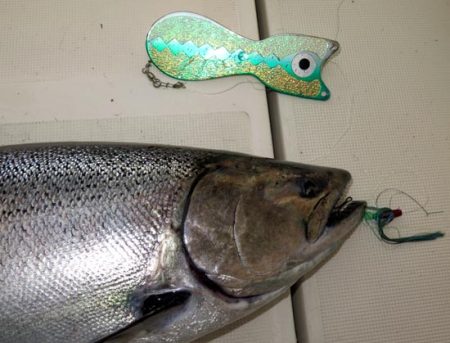 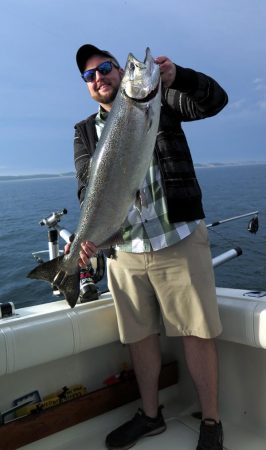 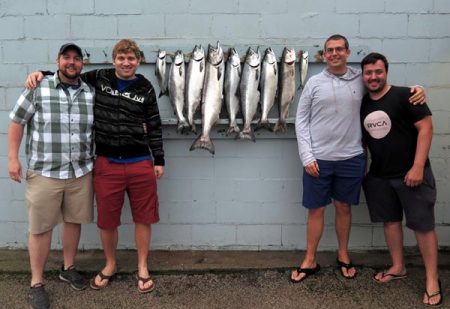