We fished straight out of Ludington today setting up in 85 feet of water. It was overcast and rougher than it has been the last few trips. We trolled north all the way to the 00’s before we turned and made an upwind troll. Action was steady until around 9:00 a.m. when it slowed considerably. We had 8″ Chrome and Lake Trout Candy Spin Doctors and WhirlyGigs on all our rods except 1 out down. That had a Chrome Spin Doctor/White Pink Dot Spin-N-Glo on it. We took about a 10 lb. King bouncing bottom on that rig plus 2 Lakers. The rest of our fish came on Dreamweaver WhirlyGigs. We took a Steelhead on a Chrome Spin Doctor/Glow Wonder Bread WhirlyGig bouncing bottom on the chute rigger. It was cool seeing it come shooting out of the water jumping with the Trout rig in it’s mouth. We tried to keep our down speed on our Fish Hawk between 1.9 & 2.3. It was hard to keep a consistent speed with all the wave action. 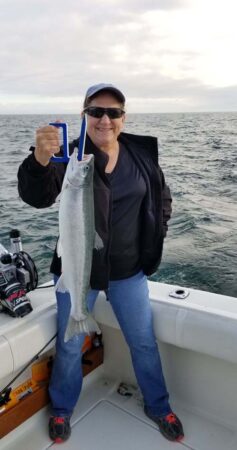 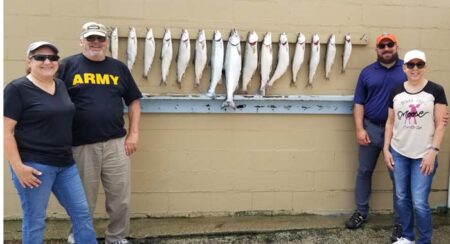