It was good to be back on the water. After the big blow on Monday we decided to head out deep figuring that water would be the least affected  by the north northwest blow . We headed out southwest  and shut down in 240 feet of water. The surface temp was 57.3 and it was 57 degrees 45 down on our Fish Hawk probe. The waves out there were bigger than expected. We put it on a 240 troll into the waves and took it out to 550 feet of water. Our first fish came on a 2 color core with a Yeck Fireball. It was a Lake Trout. We hit another fish on that rig later in the morning. We picked away all the way until we turned  back on a 30 degree course. It was surprising that every fish we caught was a Lake Trout. Surprising because the deepest fish we hit was on a 10 color core and the temp never got below 57 degrees. Also we really had the speed bumped up, 3.0 to 3.2 at the ball. We were set up for Steelhead but only hit one. It took a Super Slim Buffalo Bill spoon out 75 on a Slide Diver. It made a couple jumps and was gone. We hit a Trout on it too. Our lead cores took the majority of our catch. We had two 2 color cores, two 3 colors. two 5’s, one 7.5 and one 10 color. They all took fish. A 5 color with a SS Rasta Goose took 2. Our best was a 10 color with a mag size Modified Carmel Dolphin. It went 4 times. Our 7.5 had a SS Green Jeans that went a couple times. Our crew held up well under tough conditions. We finished up in 480 feet of water two miles south of Ludington Harbor. 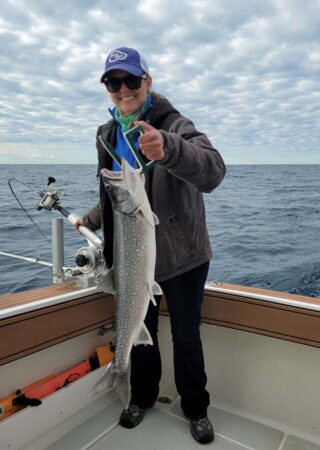 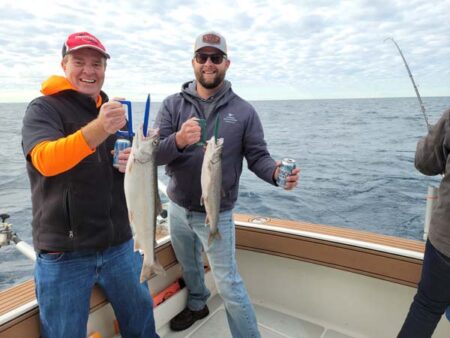 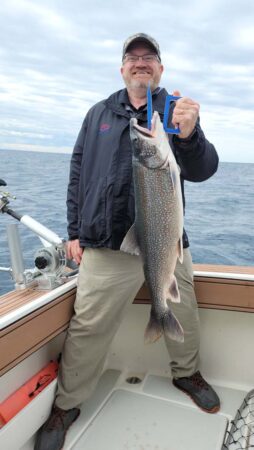 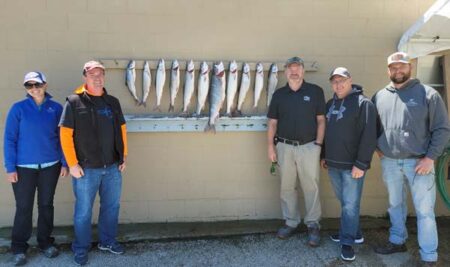