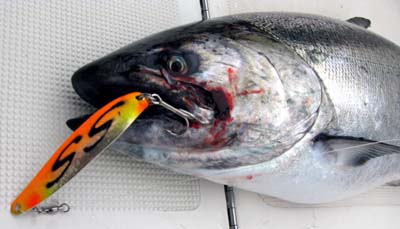 We fished north of Ludington today setting up off the Bath House in 90 feet of water (fow). We hit a fish right away on an 8″ Blue Bubble Spin Doctor/Pickled Sunshine Action Fly out 80 on a high wire. We were trolling north working between 110 & 70 fow. A 10 color core with a Yeck Lighting went next and a Super Slim Orange Signature Series on a 7.5 core hit a fish and we had a double on. We boated both those Kings and then no more action all the way to the middle of the 04’s. We put it on a 330 troll heading out to deep water and hopefully a nice temp break. The surface temp was 57.6 degrees for most of our out troll. It was a slow pick all the way out. A Tin Can Dodger/Green Crinkle Action Fly down 80 on the chute rigger took 3 Kings and an out down set at 55 with a pair of regular size Dreamweaver Golden Eye spoons took 3 fish also. We took a few fish on our cores with the 7.5 color SS Orange Signatures, pictured right, being the best. We finally made it to a break out in 540 fow north of the Point and the action picked up.  It was a pretty tight break dropping from 57.6 all the way down to 41.8 in about a mile. We only had 2 meat bites, both on high wires, so we pulled one and replaced it with a Slide Diver. It was near the end of the trip so it wasn’t out very long but it took 2 nice Kings. One of them weighed over 15 lbs. and was the biggest fish of the day. We had a Super Slim Fireball out 85 with about a 20 foot lead on that diver. A 3 color core with a Super Slim Starburst took 2 Steelhead.  We hit fish on the warm side of the break and in the cold too.