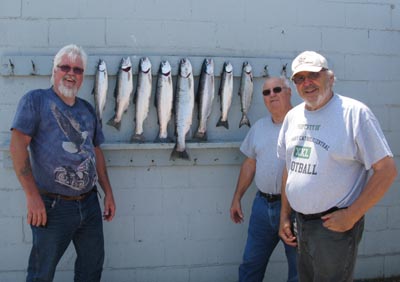 We started the morning up north today just off the Bank. We stopped around the Bathhouse and took a temp reading. It was 53 degrees at 50 feet. That is a lot better than the 39 to 41 degree readings the last couple days at 40 feet. For a Monday there were quite a few boats out so we ran further north to avoid the traffic. We set up about a mile short of the Point. When we dropped the Fish Hawk probe back down to 50 ft. we got a 41 degree reading. So instead of our usual north troll we turned and trolled south. We hit a big fish on a high Slide Diver out 90 feet with a magnum glow spoon, but it didn’t stay hooked very long.  We were seeing some marks on the graph near the bottom, but not many suspended. We stayed pretty much between 110 and 130 feet of water (fow). No bites all the way down to the high 00’s. We finally took a smaller King on a regular size Fuzzy Bear Yellow Tail Spoon free sliding above another Yellow Tail down 35 on an out down. We had already made up our minds to run out deep to try to find some Steelhead. We pulled and ran out northwest looking for surface temperature breaks. According to the latest Coast Watch report the beak we fished yesterday wasn’t there any more. We ran quite a ways and set up in the 07’s & 44’s and trolled west. It was 53 degrees on the surface and we could see some breaks ahead of us. We just had all our lines set when we hit a double on Steelhead. One on a Super Slim Steelie Stomper and the other on a SS Magic Man both on a 1 color cores. Got one lost one.We didn’t find a major  break like we had yesterday, it was more of a gradual drop. The coldest water we found was 45.8 degrees. It started to warm back up the further west we trolled so we turned back east in the 48’s. We never went too long without a bite, but the fish won quite a few of the battles today. We ran a lot of rods and the deepest hit we had was on a 3 color core with a Super Slim Steelie Dan. The rest of our hits came on clean birds, and 1, & 2 color cores. Our hot rod today was a Dreamweaver Little Devil Silver Spoon with a strip of Orange Laser tape across the front on a clean bird. It went 3 times. Other baits getting bites were Super Slim Starburst, Double Orange Pearl and a Yeck 22 Pat’s Bait. We took one fish on a Slide Diver out 80 with a Yeck Fireball. No trips the next 2 days. Back on the water on the 2nd.