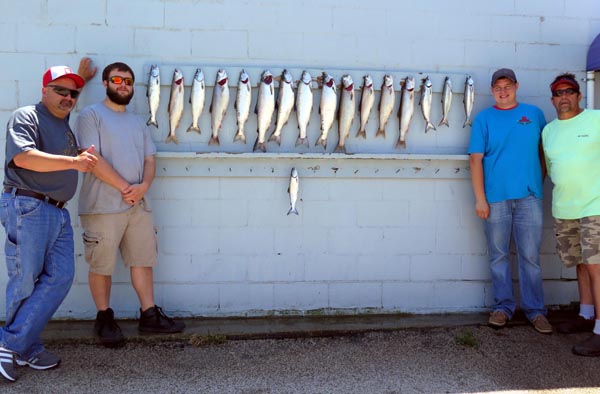 Fished north again today. We set up in 130 feet of water. We only had 1 spoon in our spread to try to cut down on the number of small Kings we were catching. We had a mag Dreamweaver EVM spoon with a glow back stacked above an 11″ Black Paddle down 120 feet on the chute rigger . It was the second rod to go. A small King took the mag spoon. We took a small King on a 200 copper with a 10″ Spin Doctor/meat rig and another small one on a 10′ White Crush Green Scale Spin Doctor/Pickled Sunshine Dreamweaver Meat Rig. We landed those 3 and a big King hit a 10″ Black White Crush Green Scale Spin Doctor/Froggie Big Water Meat Rig. It got off about 50 ft. behind the boat. That was our only mature Salmon bite all day and the end of our action until 11:00 a.m. We covered a lot of water and we were constantly changing rigs to try and entice some action.  We put some spoons on a couple of our coppers & cores and went into 100 feet of water just north of the Point. We were marking fish on the bottom so we put down some Lake Trout rigs. We had an 8″ Chrome Spin Doctor/Green Chartreuse WhirlyGig bouncing bottom release with what we thought was a Lake Trout. It was a Coho. Our other out down bouncing bottom with a Tin Can Dodger / Spin -N-Glo  took another Coho. We took 2 Coho on a 300 copper with a 10″ Chrome Killer Spin Doctor/Green Mile Big Water Meat Rig. A Super Slim Helmet on a 10 color core took a Coho and a 3 year old King. We took a few Lakers too. We caught all those fish between 80 & 100 feet of water on a north troll. All the Coho were stuffed with 3″ Alewife.