We ran north today. The surface temp at the Point was 44 degrees so we kept running until the surface temp started to warm. The first 2 rods in the water fired with a pair of Kings. One hit a high wire diver that was  going out with a Dreamweaver mag Green Skinny Jeans and the 2nd hit a regular DW Blue Hulk free sliding above a mag Blue Hulk 80 down on the chute rigger. We took 3 fish today on those spoons. We released a shaker King on the slider too. We landed those 2 and a Lake Trout hit an out down 45 down on a SS Green Skinny Jeans free sliding above a regular DW Green Skinny Jeans. Our action slowed a little after the early flurry but not for long. After that we had steady action the rest of the morning. We took 3 fish on 5 color cores. One on a SS Starburst, another on a Yeck Red Laser, and another on a Super Slim Yellow Skinny Jeans. We took 2 Kings including the biggest of the day on a Purple Ham Yeck spoon on a 7.5 color core. We took a big Laker on a 225 copper with a blue glow spoon. Our 2nd biggest King took a regular size Dreamweaver Raspberry Carbon on a 250 copper. We took a couple fish on a pair of regular DW Blue Skinny Jeans.  All of our fish today came on spoons with the exception of 1 King that hit an 8″ Scotty Blue Glow Spin Doctor/Green Mirage Fly out 110 on a low wire diver.  The majority of our fish were taken between 130 and 200 feet of water. 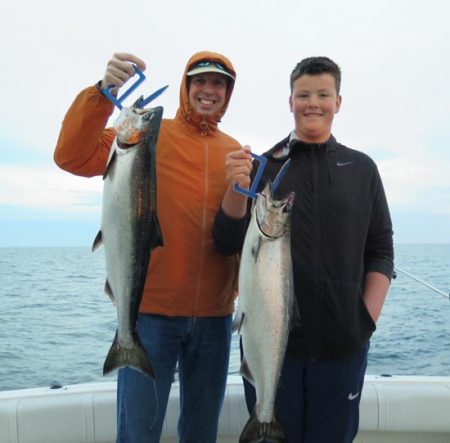 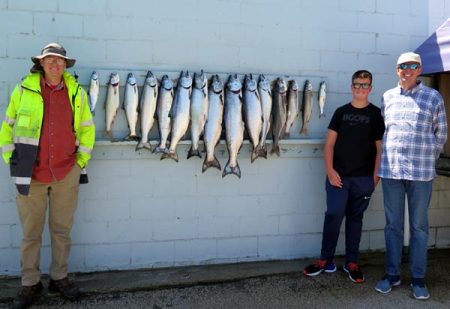 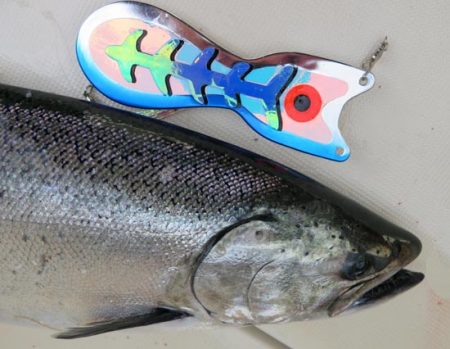