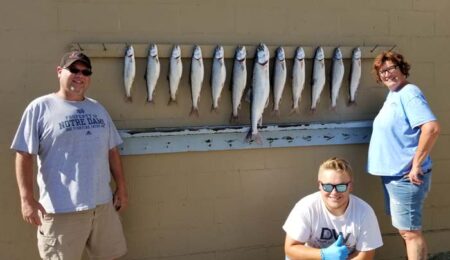 We set up in the same area southwest of Ludington in 80 feet of water that we have the last few trips and put it on a north northwest troll. The picture on our sonar unit looked good. Fish and bait were on the screen right away. The down temp was 47 degrees 75 ft. down on my Fish Hawk. Perfect, except no bites. We took it out a little deeper and still no bites. There was a charter boat in front of us and one behind us. I called both of them and no bites for them either. Finally we hit a fish on an 8″ Lake Trout Candy Spin Doctor/Chrome Blue WirlyGig with Glow Wings. It was almost to the boat but escaped. The port out down bouncing bottom with an 8″ Lake Trout Candy Spin Doctor/Mountain Dew WhirlyGig took our first boated fish. After that we had pretty steady action on the north troll. The down temp warmed the further north we went. We turned back south when it it hit 53.5 degrees. The action wasn’t as good on the south troll. It took a while but we did box a four person Lake Trout limit. After the twelfth fish hit the deck we bumped up the speed and pulled all our Trout rods. We had five boards left in. A fish hit a 200 copper with a 10″ White Slick Spin Doctor/Pickled Sunshine Dreamweaver Meat Rig. It turned out to be a big Trout that had to be released. We hit a fish on our 225 copper with a mag DW Green Jeans. It acted like a smaller  Salmon but it came off before we could be sure. There are more pictures from todays trip on Free Style Charters Facebook page.