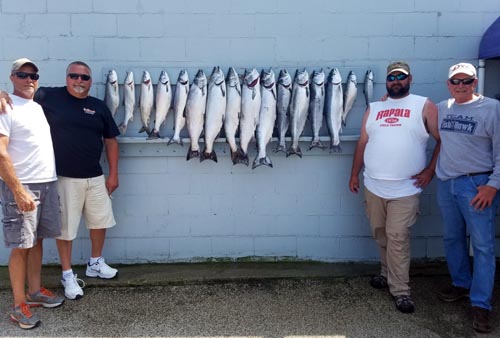 The bad brake Team Free Style had during the Offshore Classic last weekend followed us into the Big Boy Tournament. The catch pictured left was from Monday, the day before the Big Boy event. We were fishing south. So the morning of the Big Boy we headed back there. The action was good. We boated 11 Salmon in about 3 hours. We needed to get some Trout. We trolled out to 160 feet of water, fow, and put our wire divers and both out downs on the bottom. We took 1 Laker. Then a friend called and told us they had just caught a couple Steelhead 3 miles south of us. We ran down there and hooked 2 Steelhead an lost both of them. We were starting to get real worried about catching 2 more trout, so we pulled lines and ran back to Ludington to try and get them. We hit a big King on a SS Git’er Done. wile we were fighting it a 225 coper with a SS Super Bread took a hit. We landed the king but the other fish, a Trout got into one of our wires and got off. We were sick about that. Time was running out and we had to pull our lines. Jeff was reeling in our rod, a wire diver with a WhirlyGig on  on it, when a big King hit it. It stripped out 700 ft. of wire. We fired up both engines and went after it, The port engine started a little hard. When we got beside the king and netted it the port engine died. It wouldn’t start. We headed in on 1 engine. It was 20 minutes to 2 and our gps said it was going to take 30 minutes to get in. We tried our best to get the port engine running but it would not start. We ended up being 10 minutes late and our catch was disqualified. We had 153.20 lbs. with 10 fish. We got the boat running. There is a problem with my port fuel tank. Both engines run fine off 1 tank but it wouldn’t give us the range we needed to get back to where we wanted to go. The picture in the middle was our catch. Our best baits during both tournaments were a 10″ White Slick Spin Doctor/Pickled Sunshine Action Fly on a high wire diver, a Super Slim Super Bread on a 225 copper, a Super Slim Git’er Done on a 175 copper and  10″ Yellow Sparkler Sparkler with a blue meat rig. We use Dreamweaver Premium Strips in all our meat rigs and Morgan’s Tackle copper & wire.