We didn’t get the big early bite this morning up north. We set up in about the same spot as yesterday. The graph looked good but we had all our rods in the water before we hit our first fish. It was a small Salmon off an out down set at 95 with a standard DW Green Jeans stacked with a Super Slim Green Jeans. It took the stack. We took a mature King on a low wire Deeper Diver out 170 with a 8″ Flip Fin Two Face Paddle/Pickled Sunshine Action Fly. All 3 of our mature Kings came on Filp Fins with the fin deployed. We ended up running the Two Face on both low wires and a Green Dragon Slayer Flip Fin/Pickled Sunshine Action Fly out 300 on a high wire. The starboard low out 170 took 2 matures and the port low out 160 took a smaller King and a Coho. The high out 300 took our biggest King. We had another big rip on it but we didn’t get a good hookup. 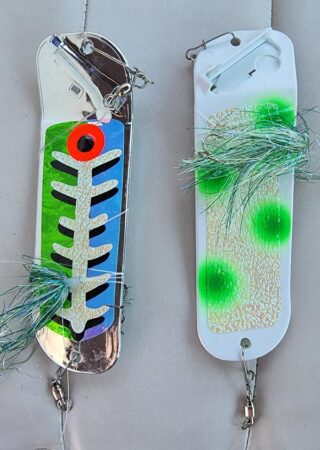 We had an 8″ White Slick Spin Doctor/Pickled Sunshine Action Fly out 300 on our other high diver. It went twice but we didn’t get either one. Not a lot of action on our boards today. Took a small King and lost a good fish on a 325 with a Super Slim Green Hulk. We started out with a big White Slick DW Paddle/Pickled Sunshine Action Fly stacked with a mag DW Blue Spotted Dolphin then switched over to an 8″ Kevin’s Girlfriend Spin Doctor/Green Mile meat rig. No bites on the main baits but the stack went twice. The Lake was beautiful, and we had decent action. We use Dreamweaver Premium Strips in all our meat rigs and Morgan’s Tackle copper and wire. 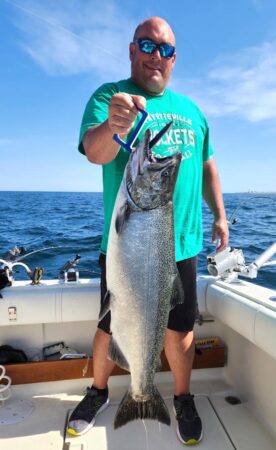 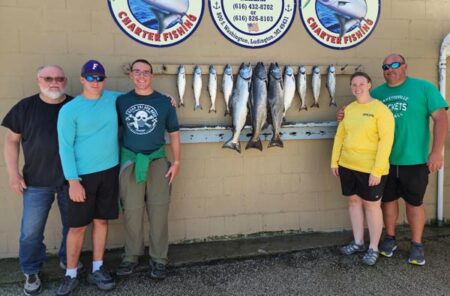