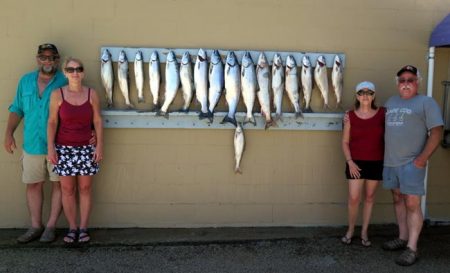 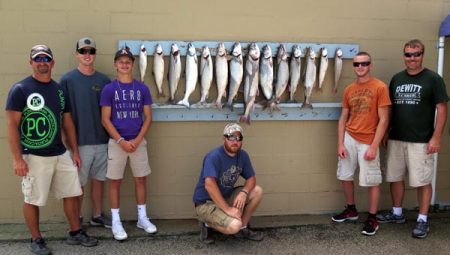 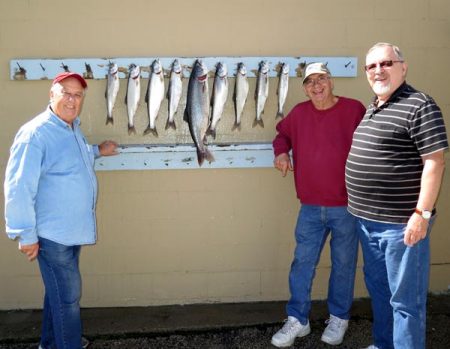 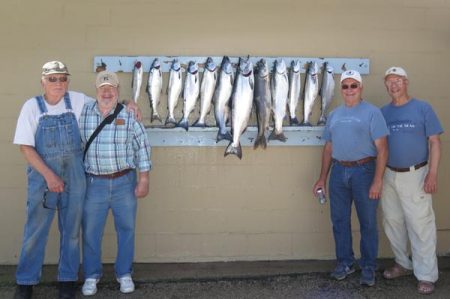 The Ludington Offshore Classic is over. It was a tough tournament for Team Free Style. We had good catches the four days leading up to the event, pictures above. Sunday we ran out deep and had a big box of fish including 4 big mature Kings, several Steelhead, a few nice Trout and some good size Coho. . Monday we targeted Lake Trout fishing 100 feet of water south of the Consumers Power Pump Storage Facility. We boated 15 Trout and one King Salmon. Tuesday it was too rough to go deep so we fished by the Consumers Facility. We managed a 3 man limit of Lakers before we headed back to the dock early because of big waves. Wednesday the Lake was real calm and we ran back out deep. We had a good catch, 2 mature Kings, a big Laker and several Coho & Steelhead. Thursday was the first event of the tournament – Ruboy Thursday. This is a fun tourney. You can catch as many fish as you want and weigh your biggest five. A friend had caught a few big fish south by Little Point Sable Wednesday. Our plan was to run south and try to catch 5 big fish. We did run south but never had bite.  We pulled lines and ran out deep to try our luck out there. We boated 15 fish but none heavier than 6 lbs. Our 5 fish weight total was 26.25 lbs., very disappointing. Fridays Woman and Kids tourney was canceled due to big waves. We went out to scout for the main tournament Saturday & Sunday. We only fished a little while and caught 1 Laker. People were catching mostly small Lakers in our Trout spot and going deep was out of the question after the small fish we caught Thursday. The two spots we fished earlier in the week were out for the weekend because we knew those small fish weren’t going to give us much of a chance to win the tournament. So we decided to try our luck up north by Manistee. We ended up catching our 12 fish with a few small Kings and some Lakers for a weight of 103.5. That score was good enough to put us 6th palace. We ran back up there Sunday. It was very slow fishing and the bigger fish seemed to have disappeared. We caught 10 fish but our catch only weighed 49.3 lbs. So the weekend was tough for us. We finished in 12th place.  Monday was a practice day for the Big Boy Tuesday & Wednesday Tournament. We didn’t catch many fish but it did help us to decide where we were going to fish on Tuesday. We ended up running south of Little Point to see if we could catch some Kings. We caught 8 fish and weighed 62.5 lbs. Today we ran back down there to see if we could catch some Big Fish. We had a nice 11 fish box including 4 Kings that weighed over 24 lbs. Our biggest was a little over 27 lbs. We were in 20th place after day one Saturday. Our 144.45 lb. box moved us up to 10th  place today. We didn’t win any cash but our catch today did lift our mood after our disappointing catch yesterday. The tournament committee did a great job and the event was well run.