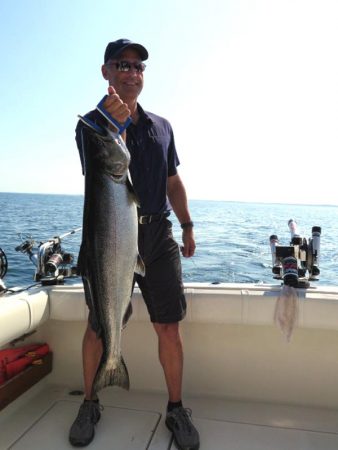 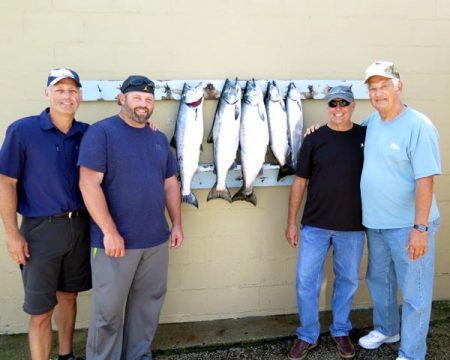 Fished north today setting up in 110 feet of water. All our rods were set and no bites. Talked to other captains fishing the same general area an the story was the same, no bites for them either. We finally hit our first fish on a 7.5 color core with a regular size Bloody Nose spoon. We took 2 of our 5 fish it. It was a while before we hit our next fish. It took a 200 copper with an 8″ Kevin’s Girlfriend Spin Doctor/Pickled Sunshine Action Fly. While we were fighting that fish another King bit an 8″ White Slick Spin Doctor/Pickled Sunshine Action Fly 85 out on a low wire diver. We boated both fish. We turned back south and stayed between 100 & 130 feet of water with no more bites. A few boats were having some action out deeper so we put her on a west troll. We took 1 fish in 370 feet of water. It was the big King pictured above. She hit an 8″ Chilly Willy Spin Doctor/Pickled Sunshine Action Fly out 160 on a high wire diver. Bites were hard to come by today. Our crew did a great job going 5 for 5.