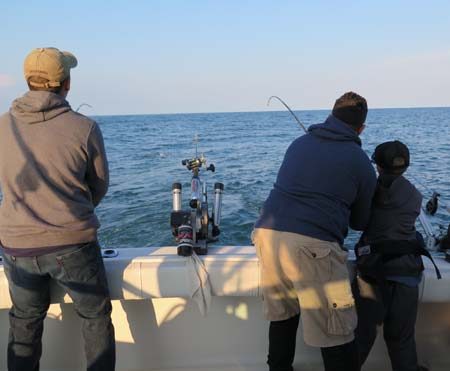 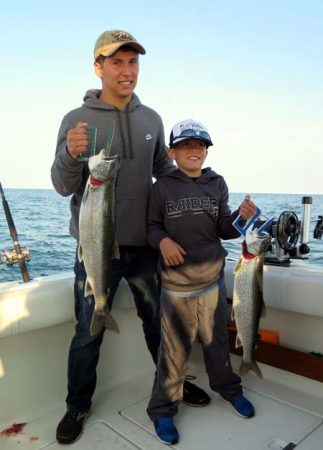 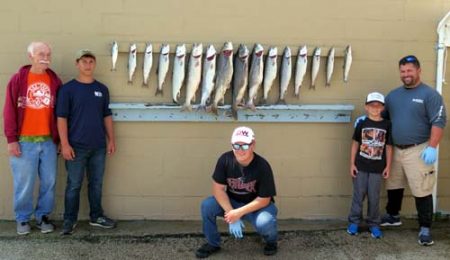 We fished north today. We were planning on setting up a little north of the Bath House, but the northwest wind really cooled off the water. It was 46 degrees on the surface and it looked colder at the Point. We ran north until the water started to warm and set up about a mile north of the Point in 110 feet of water and trolled north. The surface temp was 51 degrees. We took a small King on a Super Slim Rasta Goose on a 7.5 color core as it was going out. After that no bites for a while. We were marking fish on the bottom and sent a 10″ Lake Trout Candy Spin Doctor/Blue Chrome Glow Wing WhirlyGig down there. It wasn’t down long when it released with a good size Trout. We put it back down and took another Trout. We pulled our wire divers  and put 10″ Spin Doctors/WhirlyGigs on all four of them. Our best rigs were the Lake Trout Candy and all Chrome Spin Doctors and the Chrome Blue Glow Wing and Chrome Chartreuse WhrilyGigs. We took one Laker on a 225 copper with an 8″ White Slick Blue Dot Spin Doctor/Blue Bubble Action Fly and another one on a 200 copper with a glow spoon. When we pulled our lines the surface temp was 57 degrees. We pull our lead core and Morgan’s Tackle copper lines with Dreamweaver Ninja Boards.