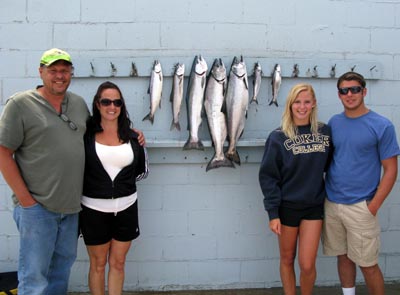 After the hard north blow yesterday the surface water up north on the Bank was in the low 40’s. We went northwest until the surface temp started to rise and set lines. It took a while before we hit our first fish, a nice King out 100 on high wire diver with a 10″ Spin Doctor/meat rig. The bites were coming slow today. We hit two big Kings on our chute rigger down 70 with a 11″ White Crush Paddle/Pickled Sunshine Action Fly. One got away and the other, pictured left, ended up in the box. We lost another King on a 10 color core with a 10″ Chrome Killer Spin Doctor/Green UV Big Water Meat Rig. It turned the hook. We took a Laker and a small King on a 2 color core with a Dreamweaver LD Bumblebee and a good size Steelhead on a Super Slim Slurpee. A 3 color core with a SS Steelie Stomper took a smaller King too. We fished between the 02’s and low 04’s in the 34’s to the 36’s.