Due to the forecast of 3 to 4 ft. waves from the West Southwest we set up a little north of Ludington today in 120 feet of water and rode the waves north. We have been fishing south for about a month  so we weren’t too sure what to expect. We were running basically the same program that was working  south. It took a while for our first bite. Our starboard out down with a pair DW Chilly Willy’s took a hit but didn’t hook up. That was our only spoon bite all morning. All our fish came on Spin Doctors and Fly’s and Spin Doctors and Meat Rigs. We had a big King hit a Natural Glow Captains Choice Cut Plug but it straightened the hook and got off. Our hot set up, pictured below, was a 10″ White Crush Light Green Scale Spin Doctor/Pickled Sunshine Dreamweaver Meat Rig out 185 on a high wire diver. It went several times and took our biggest fish, a 28+ pounder. We had an 8″ Blue Bubble Spin Doctor/Blue Bubble Action Fly on a low wire diver out 145 and another one on a 250 copper. They both took a fish. An 8″ Double Slick Spin Doctor with a Pickled Sunshine Action Fly on a 275 copper took a big King. We had one Trout rig on the bottom and that took a King. It wasn’t as rough as forecasted but it was still pretty bumpy out there. We use Dreamweaver Premium Strips in all our meat rigs and pull our coppers and core with Dreamweaver Ninja Boards. 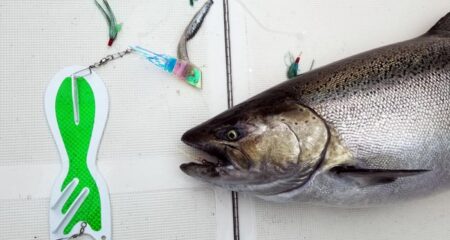 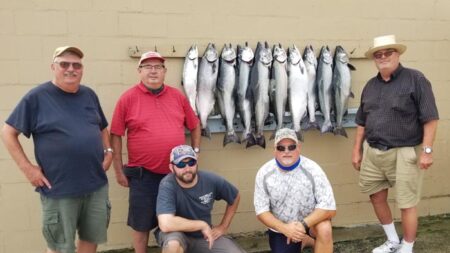