Fished north again today setting up in 110 feet of water. We had the same crew we had yesterday and I’m afraid there would have been a mutiny if we turned south. First mate Seth had his high diver with a 10″ White Crush Spin Doctor/Pickled Sunshine DW Meat Rig trickling out while he was setting an out down when a big King hit it only 83 feet out. First rod in and fish on.  We landed it in the dark. Our starboard out down set at 65 ft. with an 8″ Blue Bubble Spin Doctor/Blue Bubble Action Fly went next, another King. Our starboard low wire diver out 145 with a 10″ Kevin’s Girlfriend/Big Water Green Mile fired with another mature King. That was our hot rod for the morning. We landed 3 out of 4 Kings that hit it. The fourth one escaped at the back of the boat. Our divers were good today. We took a King on a high wire out 185 with a 10″ White Crush Light Green Scale Spin Doctor/Pickled Sunshine Action Fly and another high wire out 170 with a 10″ Live Wire Spin Doctor/Pickled Sunshine Dreamweaver Meat Rig. Only 2 board bites. Lost a fish on a Wonder Bread Captain’s Choice Cut Plug on a 200 copper and took a King on an 8″ White Crush Light Green Scale Spin Doctor/Pro Am Atomic Fly on a 200 copper. The water was warmer today than yesterday so we are hoping it doesn’t get too warm for tomorrows trip. We use Dreamweaver Premium Strips in all our meat rigs and pull our coppers and cores with Dreamweaver Ninja Boards. 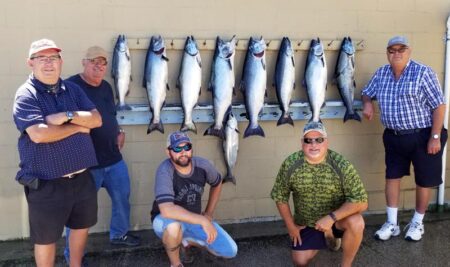