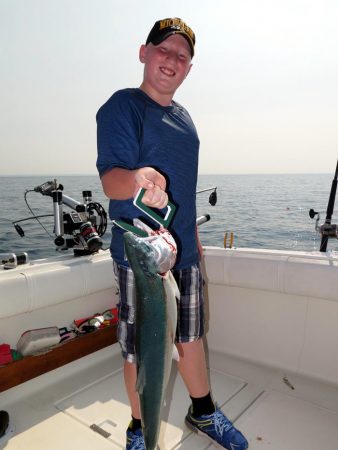 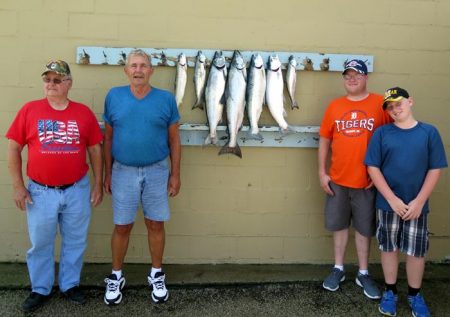 Fished out deep southwest of Ludington today setting up in 210 feet of water. The temp was 46 degrees down 60 feet. Our first bite was on a 225 copper with a blue glow spoon. It was a 2 year old King. That bait went 4 times today on our 225 copper. We landed 2 of them. Next was a Lake Trout on a 175 copper. It wasn’t long after we boated the Laker that a low wire diver out 80 with a 10″ Kevin’s Girlfriend Spin Doctor/Pickle Sunshine Action Fly took off. It was a King. It made 1 good run and got off. We took a small King  that low wire later in the morning. We had a high wire diver out 130 with an 8″ Blue Bubble Spin Doctor/Glow Blue Bubble Action Fly that went 4 times . We got 1 of them. Our crew did a good job with the fish that hooked up. Some of our bites just hit and were gone. Maybe they were Coho. We were on a south southwest troll and after our early action we were dead for a long time. Near the end of the trip we turned back north. We took our biggest fish of the trip, a nice King, on a 300 copper with a 10″ Showtime Spin Doctor/Blue Gasoline Dreamweaver Meat Rig. Shortly after boating the King a good size Steelhead, pictured above, hit a 225 copper. The young angler did a great job landing that Steelie. We use Dreamweaver Premium Strips in all our meat rigs and Morgan’s copper on all our copper rods.