Back on the water today after a two day layoff. Had a party scheduled from out of state for two days with a deposit. They never showed. Anyway, we fished straight out and a little south. Wanted to head southwest on a 240 troll but the unexpected waves made it a very uncomfortable trough troll. We hit our first fish on a pair of glow spoons 65 down on an out down. It was the King pictured below with Mark and 1st mate Seth. We had a pair of Chilly Willy Dreamweaver Spoons on the other out down. They went twice with Coho. Both times they took the Super Slim free sliding above a regular DW. We took another mature King on a 10 color core with a Pink Dot Captain’s Choice Cut Plug. Our other Mature King came on a 10″ White Black Dot Spin Doctor/Pickled Sunshine Action Fly out 135 on a low wire diver . We turned back on a northeast troll a took a nice Steelhead on a 7.5 color core with a Yeck Red Laser spoon. We had meat rigs on 3 of our 4 divers but never got a good hook up on any of them. We use Dreamweaver Premium Strips in all our meat rigs and pull our coppers and cores with Dreamweaver Ninja Boards. 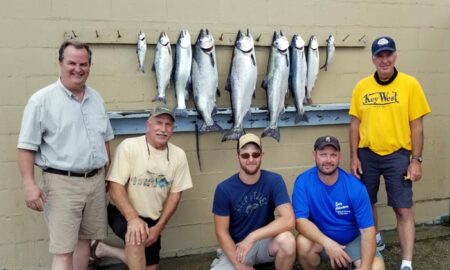