Fished south of Ludington this morning. The water was warmer today. Didn’t find decent temp until we lowered our Fish Hawk probe to 80 feet. All rods were set before our high wire diver out 185 with a 10″ White Crush Blue Bubble Spin Doctor/Blue Bubble Dreamweaver Meat Rig, pictured below, started screaming out line. While that one was still on it’s first run the starboard out down with a regular DW Chilly Willy and a Super Slim Chilly Willy free sliding above it took off with another big King. It wasn’t on for long before it made a run toward the boat and escaped. Then the port high wire diver out 200 with a 10″ White Crush Black Dot Spin Doctor/Pickled Sunshine Dreamweaver Meat Rig fired with a big King. It was pretty exciting for our young crew. While Dad & Son were fighting the double a 250 copper with a glow spoon took a hit but didn’t hook up. After a long battle we boated both the Kings on our high wires. We took two fish on the same rod on our out down with Chilly Willy’s, a small Coho & medium King. Our starboard 250 copper with a mag glow spoon hooked up with a mature King only to have the hooks pull just before we could get it in the net.  We took a King on a low wire diver out 145 with a 10″ Kevin’s Girlfriend Spin Doctor/Green Mile Meat Rig. Our high wires were the stars today. The 10″ Blue Bubble Spin Doctor/Blue Bubble Dreamweaver Meat Rig took 4 mature Kings and the other high diver with the 10″ White Crush Black Dot Spin Doctor/Pickled Sunshine Dreamweaver Meat Rig out 200 took 1 mature King and 2 Lake Trout. We took 2 smaller Trout on a 8″ Chrome Spin Doctor/White Pink Dot WhirlyGig fished near bottom on the chute rigger. We use Dreamweaver Premium Strips in all our meat rigs and pull our cores & coppers with Dreamweaver Ninja Boards. There are more pictures from our trip on Free Style Charters Facebook page. 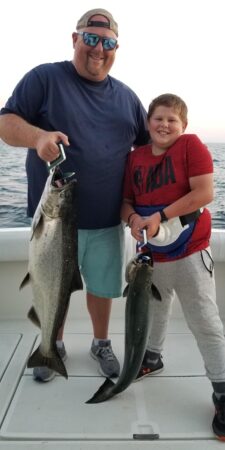 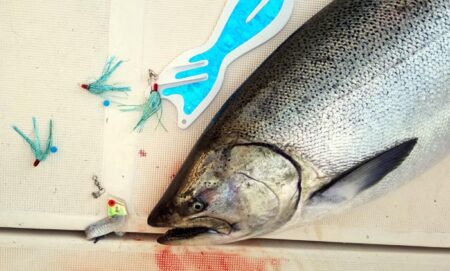 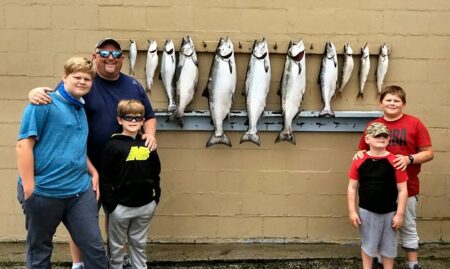