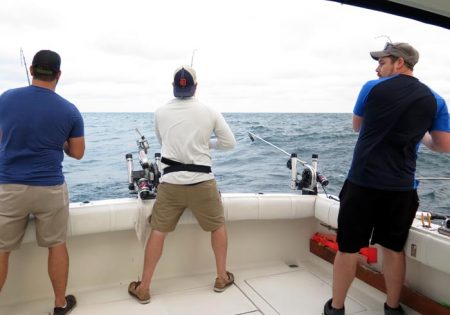 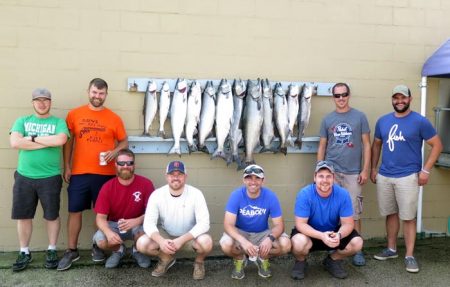 It was pretty rough when we set up in 110 feet of water south of Big Suable Point this morning. The waves were out the northwest and we were trolling north with both engines in gear and both sea anchors deployed. We had 8 rods set when our high diver out 180 with a Wonder Bread Captain’s Choice Cut Plug took off with a big King. It was taking out wire and our 175 copper with a Natural Glow Captain’s Choice Cut Plug stated taking out drag, another King. One of our out downs set at 65 ft. with a pair of glow spoons started bouncing, another King. What a melee, 3 Kings on and the boat rocking and rolling into the waves. We managed to boat 2 of the 3 Kings. Both our low wire divers took hits shortly after our triple but neither one hooked up. One low wire with a 10″ Black Slick Spin Doctor/Black Gasoline Dreamweaver Meat Rig out 110 went a total of 3 times, we boated 2 out of the 3. We had one more triple. The low wire, a 250 copper with a mag Dreamweaver Blue Hulk, and a 300 copper with a black glow spoon. We boated 2 of the 3. The out down with the glow spoons went one more time and we landed that King. We took a Laker bouncing bottom with one of our Trout rigs. We ran a 2 boat charter today with Clocked Out Charters. Our trip was part of a bachelor party weekend. Despite the big waves it was a fun trip.