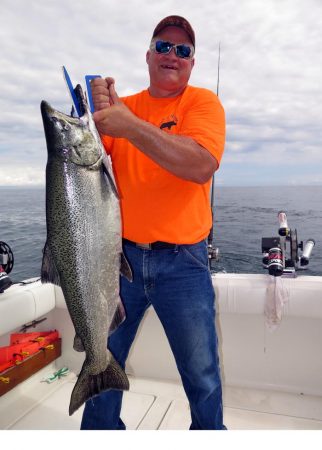 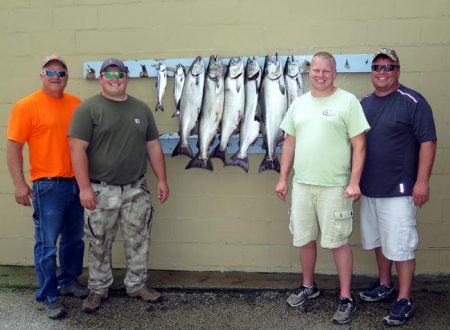 Went north this morning and had our slowest start of the year. We were marking bait and some fish but no takers. We finally got a bite on a high wire diver out 200 with a 10″ White Crush Spin Doctor/Pickled Sunshine Dreamweaver Meat Rig. It got off and so did our next one on a 250 copper with a glow spoon. We finally boated our first fish, a nice King, on a 300 copper with an 8″ Kevin’s Girlfriend/Pickled Sunshine Action Fly. We lost another one on a low wire diver out 145 with an 8″ White Crush-Slick Spin Doctor/Liquid Sunshine Action Fly. We took a small King on that rig later in the morning. We took a King on a low wire out 150 with an 8″ Showtime Spin Doctor/Blue Gasoline Dreamweaver Meat Rig. Another big King took a 10″ Kevin’s Girlfriend Spin Doctor/Green Mile Big Water Meat Rig on a 300 copper. Our biggest King of the morning took a 10″ Showtime Spin Doctor/Blue Gasoline DW Meat Rig. We missed one on a 350 copper with a 10″ Yellow Bikini Bottom Spin Doctor/Yellow Glow Dreamweaver Meat Rig. Our last big King hit a 10″ UV Slick Crush Spin Doctor/UV Gasoline Dreamweaver Meat Rig down 70 on an out down. We had a heck of a time getting it in  the boat. It went under then over both wire divers and really made a mess. We were lucky to box him. We use Dreamweaver Premium Strips in all our meat rigs and Morgan’s Tackle copper on all our copper rods.