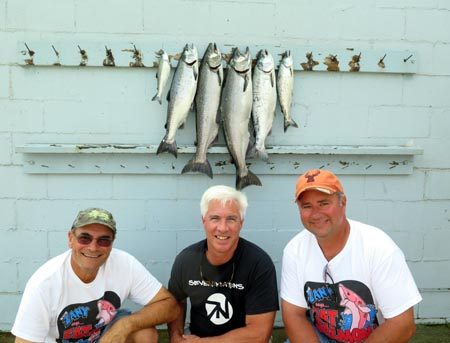 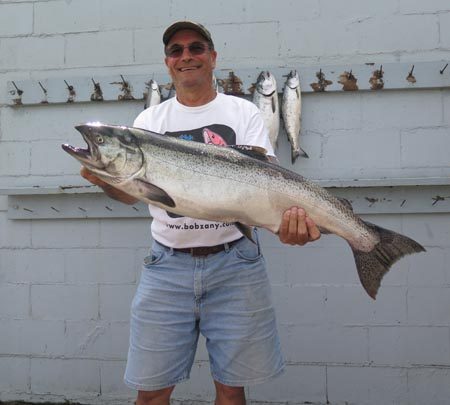 Fished south again today. Lots of bites, but the fish won most of the battles.  It looked we had good hook ups and then they would get off. Had a couple nice  Kings run into our coppers, make a mess and swim away.  A high wire diver out 280 and later 300 went four times with a 10″ White Crush Spin Doctor/Pickled Sunshine Dreamweaver Meat Rig. Our riggers got bit the most. We had an 8″ White Crush Spin Doctor/Liquid Sunshine Action Fly on both an out down and the chute rigger each go a few times. The out down was set first at 75 and a little later at 85 feet. The chute was 100 down. We had a mag Fuzzy Bear Modified Blue Dolphin stacked 10 ft. above the main on the out down and a regular DW EVM spoon stacked 15 ft. above the main on the chute rigger. They hit the Fuzzy bear twice and the EVM once.  Our other out down had a pair of regular size Blue Skinny Jeans set 55 down early then 85 down later went 4 times. A low wire out 180 with a White Slick Big Foot/Pickled Sunshine Action Fly went twice and we didn’t get either one. We only had 2 copper bites. They came early on a 200 copper with a # 3 pink glow plug and both those got off too. We use Dreamweaver Premium Strips in all our meat rigs and Morgan’s copper on all our copper rods and Morgan’s wire on our wire rods.