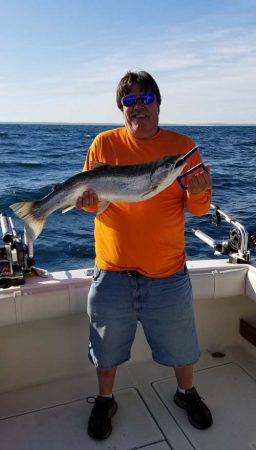 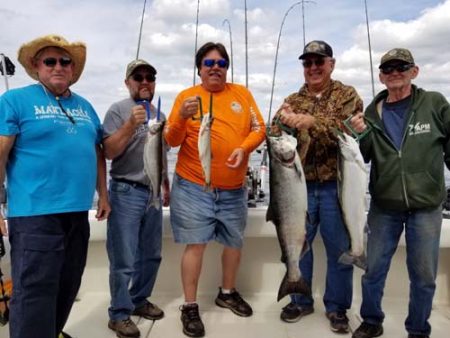 Another tough day south. We set up in 100 feet of water and trolled south. We went a long time without a bite so we turned out on a west troll. We hit a fish on a 10 color core with a Captain’s Choice Cut Plug. After a long fight it turned out we caught a lead core line that had broken off from another boat with a King on it. It was almost to the boat and broke off again. That King was having a lucky day. We took a Laker on a Trout rig bouncing bottom.  We took a nice Steelhead on a DW Green Jeans 55 down on an out down and later in the trip took a King on the same rod. We lost another Steelhead that straightened the swivel  on a 250 copper and caught a Laker on a blue glow spoon on a 225 copper. We use Dreamweaver Premium Strips in all our meat rigs and pull our lead core and Morgan’s Tackle copper with Dreamweaver Ninja Boards.