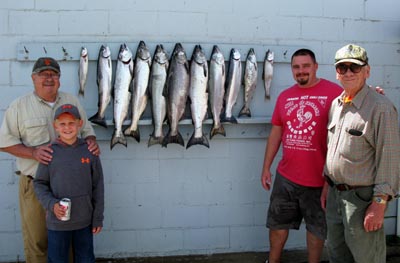 It wasn’t exactly calm this morning up north, but it was much better for fishing than it has been the past few days. Our first 2 bites came on wire divers. A high wire out 150 with a 10″ White Crush Spin Doctor/Action Fly Meat Rig took a King and so did the low wire diver out 90 with a 10′ White Crush Spin Doctor/Dreamweaver Froggie Meat Head. A 11″ White Crush Paddle/Silver Addiction Strong Fly 60 down on the chute rigger took. another King. A 225 copper with a Natural Glow Captains Choice Cut Plug and a Fuzzy Bear mag Yellowtail spoon 65 down on an out down also took Kings. We took 5 Kings total during the early morning bite and missed two others. When the action slowed we put a Tin Can Dodger/Yellow Red Dot Spin-N-Glow on the chute rigger and ended up taking two Lake Trout on it. We made an out troll at the Point and hit 5 fish boating four of them. Two were Steelhead. One took a number 5 Clown J-Plug 70 down on an out down and the other hit a 8″ Kevin’s Girlfriend Spin Doctor Green Mirage Dreamweaver Meat Rig. We took a King on a Tin Can Dodger/DW Meat Head down 150 ft. on an out down and missed one on a mag Fuzzy Bear Ali Cat Stacked 15 feet above it. Our last fish came on the high wire with the White Crush Spin Doctor/Acton Fly Meat Rig. We use Dreamweaver Premium Strips in all our meat rigs and Morgan’s Tackle copper on all our copper rods.