We ran south again today setting up in 175 feet of water. The surface temp was 48.9 degrees. Our Fish Hawk probe was down 50 ft. and the temp was 44 degrees there. We put it on a southwest troll and started setting lines. We only had a few lines set when we hit a big King on our port out down with a pair of regular DW Chilly Willy’s. The King took the main bait set at 55 feet. Our out downs had Dreamweaver Chilly Willy spoons on them. The starboard out down had a DW Chilly Willy set at 45 ft. with a Super Slim Chilly Willy free sliding above it. Both out downs were hot. We took a mature King, 2 Steelhead, and 2 Coho’s off them and missed a few bites too. We took another Steelhead on a 200 copper with a DW Chilly Willy. In case you haven’t figured it out the Chilly Willy is my new favorite spoon. We lost a big Steelhead and a big King on a 10 color core with a Yeck Copperhead spoon. We took a King on a high wire diver out 125 with a 10″ White Crush Black Dot Spin Doctor/Pickled Sunshine DW meat rig. The catch of the day was a 27.50 lb. Lake Trout. It came in as part of a double header. Both fish are pictured below. The Laker dwarfs the 18.6 lb. King next to it. The King took a Natural Glow Dreamweaver Captains Choice Cut Plug on a 8 color core. The Trout hit a 10″ Chrome Spin Doctor/Wonder Bread Spin-N-Glo fished near the bottom. The Trout  weighed 27.50 at Captain Chucks and is currently the biggest Lake Trout  on their leader board for the season. When we pulled lines in 210 feet of water the surface temp had warmed to 54 degrees and it was 48 degrees down 50 feet. We use Dreamweaver Premium Strips in all our meat rigs and pull our coppers & core with Dreamweaver Ninja Boards. 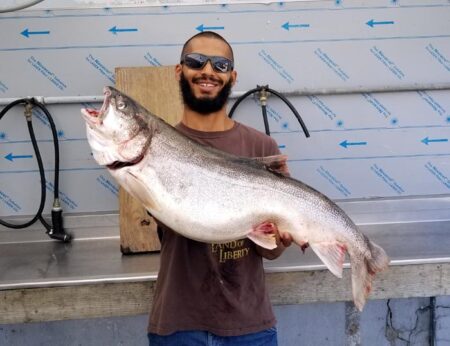