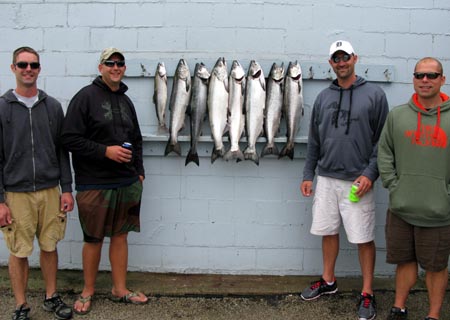 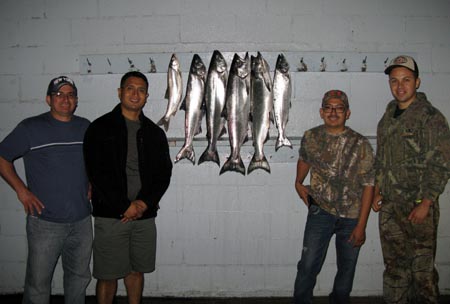 We had a double today and fished both trips up north. We hit a couple fish early. One on a mag Fuzzy Bear Yellowtail 65 down on an out down and the other on a #3 Double Glow Black Ladder Back plug on a 175 copper. We rode for a while before taking a King on a 250 copper with a #Blue Splatter Back plug. We took a Laker on a Tin Can Dodger/Green Chartreuse Spin -N-Glow fished near bottom then took another King on a 10″ White Atomic Killer Spin Doctor/Green Moo Dreamweaver Meat Rig out 100 on a low wire diver. We took a King on an out down set at 85 with a 8″ Kevin’s Girlfriend Spin Doctor/Ocean Mist Action Fly. Our last 2 Kings came on high wire divers. First was a 10″ Shocker Spin Doctor/UV on Ice Big Water Meat Rig out 165 and the second on a 10″ Mountain Dew Slick Spin Doctor/4th of July Big Water Rig. Eight bites eight fish in the boat. That doesn’t happen very often. The strong east wind made it hard to get a decent troll all morning. The wind died for our afternoon trip and it was much easier to get a good troll. We hit 2 Kings before we had all our rods set. First one was on the out down set at 85 with the 8″ Kevin’s Girlfriend Spin Doctor/Ocean Mist Action Fly. That combo took another King later in the trip. The second on a 250 copper with a 8″ UV Lizard Spin Doctor/4th of July Big Water rig. We took a Laker on our chute rigger with our Trout rig and missed another on it. Our high diver out 210 went with the same Shocker/UV On Ice set up and a low wire out 145 with a 10″ White Crush Green Scale Spin Doctor/Action Fly Meat Rig went three times. We missed a nice one on a 300 copper with a 10″ Kevorkian Spin Doctor/Green Gasoline Dreamweaver Rig. We had 12 bites and boated 6 of them. Have the day off tomorrow due to a late cancellation and have doubles scheduled for Monday and Tuesday. Probably won’t have time to post another report until Wednesday. We use Dreamweaver Premium Strips in all our meat rigs and Morgan’s Tackle copper on all our copper rods.