We fished south today setting up in 140 feet of water. The surface temp was 52 degrees. Our Fish Hawk probe down 50 showed 47 degrees. We hit our first fish in the dark on a high wire diver out 155 with an 8″ Kevin’s Girlfriend Spin Doctor/Pickled Sunshine Dreamweaver Meat Rig. It was a Lake Trout. Next our starboard out down set at 45 ft. with a regular DW Chilly Willy and a Super Slim Chilly Willy free sliding above it took a Coho. The fish took the main bait. That out down went 5 times this morning. We didn’t get them all. Our port out down set at 55 ft. with a pair of DW Chilly Willy’s never took a fish. We had a regular DW Chilly Willy on a 200 copper and it took 2 Coho. We had a high wire diver out 125 with a 10″ White Crush Black Dot Spin Doctor/Pickled Sunshine Dreamweaver Meat that went 3 times with mature Kings and once with a Steelhead. We boated 2 of the Kings and the Steelhead.  I pulled our other high wire diver and put the same set up on it. We took a Steelhead on it out 155. We tried several different set ups on our low wire divers but they never took a hit. We took a Coho on a 250 coper with a 10″ Kevin’s Girlfriend Spin Doctor/Green Mile Meat Rig. We took 3 other Lake Trout on a 10″ Chrome Spin Doctor/Wonder bread Spin-N-Glo. We use Dreamweaver premium Strips in all our meat rigs and pull our coppers and cores with Dreamweaver Ninja Boards. 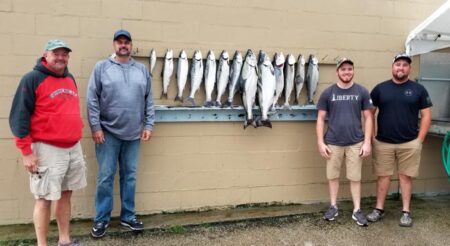