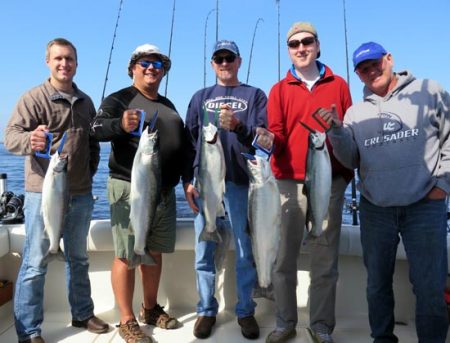 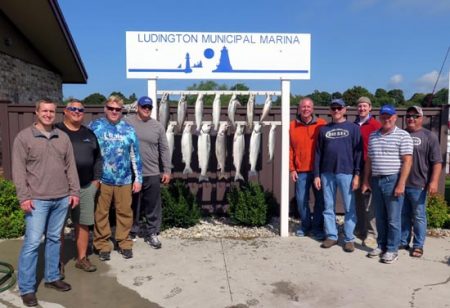 It had been a few days since we fished so we ran out deep looking for stable water. We ran straight out of Ludington setting up on the 38 line. It was colder than expected, 45 down 50 feet on our Fish Hawk. We set up there and put it on a southwest troll. The early bite was slow. We didn’t hit a fish until we got into the 39’s. We took our first fish , a Steelhead on a 200 copper with a UV Black Dot Starburst Super Slim. We took another Steelhead on the same bait later in the morning. Once we got out deeper the water warmed and the action improved. We hit 2 fish on an 8″ White Slick Spin Doctor/Liquid Sunshine Action Fly. We had a pair of Super Slim Jail Baits on a out down that went 3 times, once at 45 ft. and twice at 55 ft. Our biggest Steelhead came on a Yeck Purple Ham on a 7.5 color core. We took a couple fish on a low wire diver out 110 with an 8″ White Slick Spin Doctor/Glow Blue Bubble Action Fly. We lost a Steelhead on a 225 copper with a Yeck Copperhead and landed 2 on a 250 copper with a prototype Super Slim. No meat bites today. We had a 2 boat charter with Capt. Mike & Lie-A-Lot Charters.